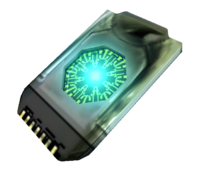 A data crystal chip, often referred to as a data crystal,[1] a memory crystal,[2] or a data chip,[3] is a human file storage and transfer device akin to 21st-century flash drives. Composed of silicon and crystal,[4] a data chip can store immense amounts of data, such as the Riemann matrix of an artificial intelligence. Although most data chips are the size of a small matchbook,[5] some may be smaller than a thumb.[6] A pea-sized data crystal chip variant is used to store "micro" AIs, like Jerrod. They are compatible with a laptop's auxiliary reader port and can connect to the laptop's holographic projector.[7]

Data crystal chips are often used to store data that cannot be sent via wireless transmissions because of the data's sensitive or complex nature. They are used by the United Nations Space Command to store navigation and weapons data as well as strategic and tactical intelligence.[8] Data crystal chips are made up of a ceramic composite, with substrate filaments, conduit tracers, carbon sealant, silicon mesh, and crystal synthesis.[9]

A relatively common storage medium for the Riemann matrix of an artificial intelligence construct—from "micro" AIs to starship-grade "smart" AIs—a data crystal can be considered the physical entity of an AI.[4] "Smart" AIs of high importance have a matrix fail-safe that will either destroy the data crystal or render it useless when activated.[2] Despite this, Doctor Catherine Halsey's personal AI, Kalmiya, was able to reconstruct a fragment of erased information from trace ionization that was taken from Araqiel's data chip, after Halsey initiated his fail-safe.[10]

For the SPARTAN-II program, by 2525, Materials Group's Chi Ceti IV division was developing data crystal chips compatible with the MJOLNIR Powered Assault Armor, given a budget of nearly three million credits with materials imported from Muroto.[9] With the Mark V and subsequent versions of the Mjolnir armor, a data crystal chip containing an AI matrix can be inserted into the Spartan wearer's neural interface; this allows the AI and Spartan to synchronize on a mental level, fine-tuning the supersoldier's reflexes to an even greater degree.[11][12] A data crystal chip may also be physically inserted into the systems of a Covenant fleet warships or military space stations to allow the AI to infiltrate the ship's battle network and take control of the ship's systems.[13][14] When a smart AI, Black-Box, was inserted into the systems of Pious Inquisitor, the AI instantly absorbed all the ship's information in the vessel's data banks and transferred it to his data chip.[15] Data crystal chips can also be inserted into numerous terminals and consoles on Forerunner structures, including Installation 04[16] and Requiem.[17] An armored matrix may be used to transport and protect an AI's data crystal chip; this is often done when no holotank is available.[18]

When the Master Chief and the Weapon were paired together, the AI initially transferred herself from Installation 07's systems into her data crystal chip by physically touching it like Cortana had earlier done while escaping from High Charity.[22] However, the Weapon was subsequently able to transfer herself into systems by manifesting a hologram of herself over the left hand of the Master Chief's GEN3 armor and then walking off of it into a terminal. By touching her hologram, the Master Chief could then transfer the AI back into his armor without ever removing the data crystal chip.[23]