This article is about the campaign level. For other uses, see Requiem (disambiguation).

Requiem is the third campaign level of Halo 4, and the second one with actual gameplay.

In Halo: The Master Chief Collection, "Requiem" is unlocked with the same criteria and awards the same amount of Gamerscore. "Midnight Launch" has been removed, however. Accessing the level's terminal unlocks "War", worth 5 Gamerscore points. "Interloper" and "Dark Fortress", each worth 10 Gamerscore points, require beating the level's 15 minute par time and 22,000 point par score, respectively.

What remains of the Dawn plummets through Requiem's atmosphere, eventually slamming into a small canyon. Cut to black.

Fades in to the wreckage in the area. An assault rifle lies on the ground, with John-117's right hand next to it. His hand stirs and tightens. The Chief shoves some debris off his chest and rises, observing his surroundings. He switches to a kneeling position and grabs the rifle.

John shakes his head in confusion, and pulls Cortana's data crystal chip out of his helmet. Her avatar appears above it.

John snaps back to Cortana.

A Phantom and two Banshee escorts speed past the crash site, interrupting the duo. 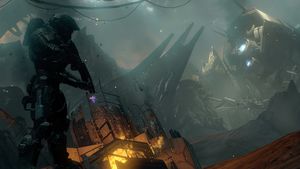 John-117 walking through the Forward Unto Dawn's wreckage.

The Chief traverses the crash site, which is littered with Covenant dead and dying.

If the Chief picks up a Covenant weapon:

A hallway section to the right contains a still-active UNSC computer terminal.

The Chief activates the terminal.

The Sangheili broadcast is put through the comms system. Cortana translates.

The Chief proceeds to walk up the cliff side. On the other side of the crevice, a malfunctioning Covenant console can be found on top of a second crashed Lich.

The Chief eventually leaves the crash site through the nearby crevice. Shortly afterwards, a comms signal is detected by Cortana.

The Chief exits the crevice and emerges onto a cliff edge. Sprawling Forerunner structures cover the entirety of the abyss below, merging seamlessly with the surrounding mountains. In defiance of gravity, great spires reaching into the clouds hover serenely above the complex; an awe-inspiring demonstration of the Forerunners' technological mastery.

A hangar bay from the Dawn rests nearby, containing several intact Warthogs. Cortana's prerecorded distress call is still looping through the bay's speakers.

The Chief boards one of the intact Warthogs and begins driving.

The path ahead leads to a series of small caverns, covered with both UNSC and Covenant debris. A valley near the Forward Unto Dawn's crash site.

The caverns eventually give way to a small valley, occupied by Covenant Phantoms and infantry. The hillsides are dotted with small Forerunner columns, with a single large spire looming in the distance.

The Chief engages the hostiles in the immediate area and neutralizes them.

The Chief speeds through the valley with his Warthog, evading snipers and blockades along the way. A single Sangheili Zealot wielding a concussion rifle emerges from a small crevice and attacks. The Chief kills the Sangheili and proceeds on foot through the crevice. Another group of Unggoy, some with heavy weapons, try to stop the Spartan, but fail.

The crevice leads to the base of the large spire, which is being held by a large contingent of Covenant. The Chief neutralizes them one-by-one, eventually arriving at the main entrance. A single cloaked Sangheili Zealot waits with a large group of lesser Covenant. Once enough are killed, the Zealot charges at the Chief. John-117 kills it and it drops something.

The Chief picks up the active camouflage unit. A schematic of his armor is displayed as the Covenant hardware is integrated into the system.

The Chief enters the entrance. The doors briefly seal him inside of the antechamber.

The transmission is still mostly static, but what sounds like voices can be heard.

The door opens, allowing the Chief inside. The interior chamber is partially merged into the cliffside, with sunlight pouring in from above. As the Chief walks up a raised platform, a squadron of Aggressor Sentinels suddenly rises from below.

The chamber springs to life, with several platforms and columns emerging from the floor, which is littered with the bodies of Covenant infantry who fell to the Sentinels. A small alcove can be found beneath the main path. A hovering sculpture lies inside, carved in the shape of a ubiquitous Forerunner symbol and covered with glyphs.

The Sentinels hold position above a Forerunner terminal at the other end of the chamber.

John approaches the console and inserts Cortana's data crystal chip into it.

John observes as a hologram of Requiem appears over the Cartographer.

The hologram flickers to the Didact's symbol momentarily, then vanishes.

Two new waypoints appear on the Chief's HUD, located on opposite sides of the chamber.

The Chief exits the room, only to find that the Covenant have gained access to the main chamber.

After neutralizing the hostiles, the Chief arrives at the second core and activates it. The signal immediately returns afterwards. While still garbled, the voices are now obviously human.

During John's absence, more Covenant lances have breached the chamber. Several are surrounding the Cartographer itself, including a pair of Sangheili.

The Chief eventually clears the chamber of Covenant infantry.

John approaches the Cartographer yet again and accesses it.

Requiem's hologram flickers red again, and all of the red circles disappear. Instead, a red sphere appears in the center of the hologram.

A diagram appears, displaying a map of the structure.

Cortana suddenly snaps back to the Cartographer.

Cortana looks back at him and nods anxiously.

John retrieves Cortana's data chip and walks away from the console. The Cartographer resumes emitting the error tone, while the hologram of Requiem briefly flickers to the Didact's symbol. Fade to black.

A STAR TO STEER BY[edit]

The Chief enters a small antechamber. A machine is projecting several beams of light into a small raised platform. Four Hardlight Shield modules lie above it.

John exits the room and into a large, open-air cavern. A large bridge spans its length, with an elevator lying dead ahead. Several Banshees and a Phantom are circling the area, while Covenant infantry patrols the bridge.

If the Chief jumps onto the bridge without taking the lift:

The Chief steadily advances through the causeway, liquidating Covenant forces along the way. An unoccupied Banshee is available for use halfway through. The exit leads into a small, enclosed valley with a large Forerunner complex. A massive spire is firing a golden pulse into the atmosphere.

The Chief blasts through hostile forces, eventually entering the spire.

The Chief fights his way through more Covenant, and eventually reaches the third floor. At the main entrance on the third floor, a Mgalekgolo pair are being engaged by several Sentinels.

With the Sentinels' assistance, the Chief manages to terminate the Mgalekgolo. The elevator room leading up to the Terminus.

If the player delays.

The door opens, leading into a hallway filled with Forerunner machinery. Sentinels weave through the pillars, oblivious to the lone visitor.

A small Forerunner terminal can be found below the elevator, the first of seven. A small sphere composed of hard light hovers in the center of the terminal. The Chief activates the console, and the sphere dissolves.

If the player stalls.

The elevator reaches its destination. John leaves the platform and proceeds across a long bridge. He observes the chamber; there are countless pillars inside the room. The Chief reaches the end of the bridge, and inserts Cortana's data chip into the Terminus. The console activates, and the Forerunner structures around them adjust themselves accordingly.

A holographic display of a Forerunner glyph appears in front of Cortana's avatar.

Cortana accesses the holographic control panel in front of her, activating the portal. John turns around to see the pillars in the room rising out of the ground.

Bipedal machines, lit in blue and armed with hardlight rifles, teleport onto the top of the pillars, growling at the Chief. John raises his assault rifle in alarm.

Cortana remains silent as she continues to access the control panel.

A portal appears beside John. Cortana turns around in confusion.

John takes Cortana's data crystal chip as one of the creatures closer to him screams. John raises his assault rifle at the machine, which quickly teleports away.

The Chief turns and charges into the portal. Cut to black.