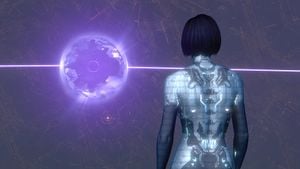 The core of Requiem, analyzed by Cortana.

The core was the most central location within the Forerunner shield world Requiem.[1][2] It hosted a curved inner surface with two emitter towers in the form of giant pylons.[3][4] It was the location of the Ur-Didact's Cryptum.[1]

The core was the deepest location inside Requiem, as the shield world's center was hollow.[5] Thus it was only accessible through slipspace, via the local teleportation grid or more unorthodoxly the use of vessels performing slipspace jumps with pinpoint accuracy. The place was mostly recluse and dark. It was possible to see the horizon curve as if inside a sphere, similarly to the interior of conservation spheres though Requiem's core was much smaller in scope.[1]

The surface was mostly made of purple rocks, canyons, and Forerunner structures, many of them containing Forerunner weapons caches.[6] Promethean constructs used to patrol the area, especially to defend two gigantic pylons. Each of these emitter towers were powered by three substations.[7] On top of these pylons were shield emitters whose purpose was to neutralize access to the Cryptum's central station.[8]

In July 2557, the Master Chief and Cortana crash landed on Requiem. They soon discovered a local Cartographer at the Gate, and learned about Requiem's core. Later, when trying to escape menacing Promethean Knights, they took a slipspace portal that led them to the core. Cortana was convinced that they had to deactivate the beams emitted by both pylons in order to free the communications channel from any interference, so that they could access what she thought was a satellite relay before being able to contact the UNSC Infinity.

The Master Chief discovered the existence of the Prometheans, and fought against many of these constructs. He destroyed the three substations of the first pylon before deactivating it. On his way to the following one, Zanar-pattern light cruisers arrived in Requiem's core by performing pinpoint slipspace jumps. The Covenant dropped numerous soldiers and vehicles, thus the battle degenerated into a three-way conflict. The Chief eventually shut down the rest of the substations and the second pylon. Unfortunately, it was too late to alert Infinity of the danger of being caught by Requiem's gravity well.

John-117 and Cortana finally gained access to the facility containing the satellite. After eliminating much of the resistance there, the Chief tried to access the satellite relay, which was revealed to be the Didact's Cryptum. Jul 'Mdama, Supreme Leader of the new Covenant, was notably present during the event. The ancient Forerunner was released from his prison, and set to depart from Requiem's core. After a slipspace rupture, John regained consciousness on the ground below. Cortana informed him that the Cryptum's sudden entry into slipspace had destabilized the core, which would lead to its imminent collapse.

Fleeing on a Ghost, the Master Chief raced to a slipspace portal that sent him back to the surface. All Covenant forces were presumably killed by the core's collapse, though Jul 'Mdama somehow survived.[1] Requiem's integrity was not particularly damaged by the catastrophe, as the shield world continued to function perfectly until its self-destruction in 2558.[9]

The Spartan Ops location codenamed "Fortress" is essentially a remix of a pylon area, though canonically it is set in the northern regions of Requiem's outermost habitable layer.[10]