This article is about the gateway on Requiem. For gateway on Genesis, see Gateway. 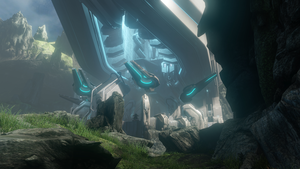 The Gate location on Requiem.

The Gate is an area on the Shield World of Requiem. It has seen many battles in the Requiem Campaign.

During the Battle of Requiem in July 2557, the area was first reached by Covenant forces that entered the shield world. They started occupying the local Cartographer, but were contained by Aggressor Sentinels. The Covenant entered into a battle with John-117 as he was exploring the planet. John-117 cleared the area of Covenant, moving into the Forerunner structure. He and Cortana accessed the Cartographer before continuing to the Terminus.[1]

Six months later in early 2558, the Covenant had secured this area and had beaten back attempts by the UNSC Marine Corps to dislodge their position. In response, Commander Sarah Palmer sent Fireteam Crimson to neutralize the Covenant. After the Covenant were neutralized, several Prometheans translocated into the area. Crimson fought them off and disabled the Forerunner turrets the Covenant were using. Robert Dalton then sent a Pelican and extracted Crimson after all the foes were defeated.[2]

Later, Parg Vol led a Covenant battle group to the position, and Crimson was deployed to neutralize him. After a skirmish, Vol and his Sangheili battle group were all killed. With Crimson under heavy attack by Phantoms, a squadron of F-41 Broadswords were sent to the Gate to successfully destroy the Phantoms, allowing Crimson to be extracted.[3]

The Gate became a base for Infinity Science, but they abandoned it due to power fluctuations related to the planet-wide slipspace portal system. Crimson was redeployed to the Gate to determine whether or not Prometheans were popping up at the location. After repelling a Promethean attack, Crimson was requested by Dr. Leslie Boyd at the Refuge to activate some equipment the scientists needed readings from. After the equipment's activation, Dr. Boyd quickly determined that it wasn't power fluctuations but slipspace signatures and warned Crimson that more enemies were traveling through the portal system right towards them. With the equipment processing a large amount of data that could potentially allow the UNSC to use the portal network, Crimson defended it from massive attack until Dr. Ruiz directed them to a device that when activated, stopped the Prometheans from teleporting in. Crimson was able to clear the area while Boyd got the data he needed to figure out how to open portals. Boyd opened a portal for Crimson, taking them to the Refuge.[4]