The concussion rifle fires 30mm Class-4 explosive plasma bolts[1], a form of munition similar in nature to the plasma mortars employed on the heavier vehicles of the Covenant - such as the Rizvum-pattern Revenant or the Wraith series of tanks. The weapon is fed by a disposable magazine cell capable of holding enough charge for six shots, as opposed to the batteries common in other Covenant directed-energy weapons - thus requiring a conventional reload. When fired, the explosive plasma bolts are launched in a projectile arc similar to that of the aforementioned heavy plasma mortars - though Covenant forces are typically reluctant to include the concussion rifle in a similar category.[2] 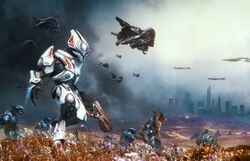 An Evocati warrior wielding the Elo'Nakada during the Fall of Reach.

The concussion rifle's design legacy can be traced back to the eponymous ancient Sangheili warlord Nakada 'Zadum, who was able to perfect the operating principles of the weapon during the Siege of Qikost.[1] This design predated even the signing of the Writ of Union or the formation of the Covenant itself, and was later modified over the empire's long history.[2] Unusually by Covenant standards, the Merchants of Qikost were able to protect the concussion rifle's design patterns from external San'Shyuum weapon-crafter influence - allowing the weapon to be modified to fit the Covenant's standardisation principles but restricting its manufacture to only Assembly Forges controlled by the merchants themselves on Qikost.[1] Despite the modifications that have been made to the weapon over time, the core purpose and functions have remained unchanged.[2]

Due to its introduction prior to the formation of the Covenant, the concussion rifle has been a mainstay weapon for the entirety of the empire's history, going up to its final days in 2552, in which it was heavily employed during the Fall of Reach.[4] The weapon's size and power dictated that it may only be employed by high-ranking personnel such as Zealots, Generals, Special Operations and Evocati[2] - something even noted by United Nations Space Command forces.[3] The weapon was additionally employed by Jiralhanae shock trooper units.[4] Personnel who were to use the concussion rifle were trained in specific battlefield tactics for the weapon's usage.[2]