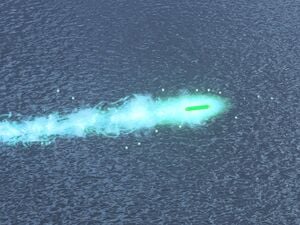 "It’s so weird. I don’t know who first called it a fuel rod gun, but it’s kind’a funny. I suppose the projectile is reminiscent of how you might expect to see a nuclear fuel rod depicted in a gee eh cartoon—all glowing green and throwing off sparks."
— Anonymous E2-BAG/1/7 serviceman.[1]

Fuel rods (Sangheili: Ket-lambdatha) are a colloquial nickname given by human personnel for a form of explosive munition used in several Covenant weapon systems.[2][3]

When the fuel rod weapon is fired, the radioactive chemical inside the fuel rod is ignited and launched from its containment shell, exploding on impact with a surface or once enough gas has been expelled from the projectile to reach environmental equilibrium.[2]

Fuel rods are primarily employed by the Covenant in anti-armor and anti-air roles, fired by their fuel rod guns and fuel rod cannons. The visibility of the fuel rod projectiles in flight give them a distinct psychological effect on enemy soldiers, which helps in their intimidation value.[1] Fuel rods fired by vehicle-mounted cannons can be guided by remote lock-on, while those fired from infantry-mounted weapons typically fire with a pronounced arc allowing them to be used as an indirect-fire mortar.

At least two variants of fuel rod munition have been catalogued by the UNSC;

Class-2 fuel rod projectiles are unguided and 38 millimeters (1.5 in) in diameter.[3][1] They are the primary projectile fired by infantry-portable fuel rod guns including the Gespu-pattern, Korva-pattern, Pez'tk-pattern and Zasqi-pattern fuel rod guns, alongside some variants of assault cannon.[2]

The fuel rod cannons mounted on the Ogab'd-pattern and Muv'te-pattern anti-aircraft Wraiths, alongside those of the Banshee use the heavier Class-3 fuel rods, which have a greater range and a capability to track heat signatures.[6] The Morsam-pattern Seraph is additionally equipped with four fuel rod cannons, which are capable of locking onto air targets.[7]

Though widely used among UNSC personnel, "fuel rod" is actually an informal term supposedly originating from common popular culture depictions of nuclear fuel rods.[1][2] Rumors surround fuel rods, with many UNSC Marines under the apparent belief that even carrying a weapon that uses them for ammunition can cause Boren's Syndrome.[8]