This article is about the gel used by the Forerunners and Covenant for energy. For the recreational narcotics used by Unggoy, see infusion. 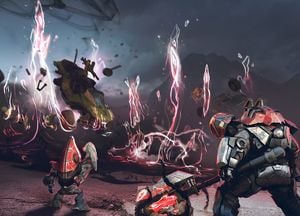 "Try not to juggle the tank too much!"
— Jiralhanae Grenadier during the Second Ark Conflict.

Infusion gel, or infusion matter, is a type of material employed by the Forerunners in the power systems used in their installations.[1] It is commonly used by the the Jiralhanae of the Covenant (in a limited capacity) and the Banished as an impromptu chemical weapon - particularly by the forces of the Clan of the Long Shields, led by Voridus.

Infusion matter consists of a series of energetic meta-materials and strained bond lattices, and is considered a perfected form of the incendiary gel material developed by the Covenant in imitation of infusion.[2] The substance was employed by the Forerunners in their power systems[1] and pumped throughout megastructures such as Installation 00 to keep the vast systems functioning.[2][3]

The Covenant employed a lesser, imperfect form of infusion matter in the incendiary gel used in a variety of their weapon systems, with incendiary gel notably used as the filler in fuel rod ammunition and Brute firebomb grenades. The Jiralhanae interest in infusion matter extends to the Banished, with Voridus taking a keen interest in the substance for his own ends.[2][3]

During the Second Ark Conflict, Voridus prototyped the weaponization of infusion gel for his own ends, though his less-successful recreations resulted in the creation of an extremely corrosive mutagenic sludge. Despite this, Voridus and his clan were quick to put this new technology into effect among a number of new weapon systems.[3][2]

Voridus' applications of infusion gel include powerful explosives, land mines and targeted bombing runs, and use of the gel as filler in various weapon systems. The Long Shields clan's own-developed "Terror Wraith" employs infusion gel to augment its plasma mortar system[4], with a similar suite of modifications available for the clan's Volatile Scarabs.[5] One such modified Scarab was used by Voridus in 2559 to breach the containment shield surrounding the Flood-infested High Charity.[6]

Certain Jiralhanae, particularly the more extreme examples of the Brutes' savagery, are often employed by the Long Shields to serve in the clan's vanguard as grenadiers. These soldiers' prolonged exposure to infusion rots and scars their bodies over time, due to their prolonged usage of specialised infusion grenade launchers.[2][7] Exposure to infusion can affect a subject's mental state, with Voridus' own exposure to infusion known to have exacerbated his obsessive tendencies.[8]

Similar effects can be observed in Huragok as the result of extended exposure to infusion. Voridus' experiments with infusion gel altered his Huragok assistants, causing some to simply fall apart while the rest have been changed in other—more subtle—ways. These "damaged" Engineers were shunned by their healthy companions and displayed distinctly non-Huragok behaviours, such as a lack of interest in repairing Forerunner machinery and sabotaging equipment of Banished who had annoyed them in the past.[9][2]

Outside of the war on the Ark, the Banished Veporokk Workshop Ravager is another weapon developed on the basis of infusion. When charged, the weapon can fire a single powerful infusion bolt, though a unique variant produced by the Armory of Reckoning injects additional high-viscosity packets of infusion matter - allowing its plasma projectiles to bounce off surfaces.[10]