Qikost is one of the two massive natural satellites of Sanghelios, along with Suban.[1] The large size of both Qikost and Suban have great effects of the tides on Sanghelios.[3] 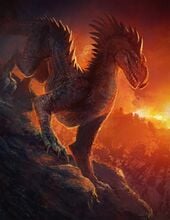 Qikost is home to large Sangheili population centers, major industrial sites, and many significant armories.[2] The vast wilderness of Qikost is home to several Sangheili hunting preserves. Sangheili frontiersmen once used early prototypes of the Rizvum-pattern Revenant to traverse these preserves.[4] While these wildlife reserves were established and continued to be maintained for the purpose of conversation, they also serve to preserve and proliferate key Sangheili cultural practices, many of which have survived since their peoples' earliest days. Both individual Sangheili and organized warrior hunting packs utilize these reserves for various rites and customs, ceremonial and practical alike.[5]

Most of the fauna found on Qikost are native to the moon itself. These include the massive steer-like u'saulbb and the dondrabe, vibrantly-colored and venomous amphibians measuring two meters long. The species most sought after by hunters are the deadly and beautiful helioskrill. While originally native to Sanghelios, these creatures can also be found amid the massive expanses scattered across the mountains of Shemlyyn on Qikost. However, the helioskrill population has dwindled due to commercialized hunts enjoyed by wealthy San'Shyuum prior to the Great Schism.[5]

Structures suspended above a body of water on Qikost.

Early in the Covenant's history, Qikost produced Sangheili swords of the highest quality, including burnblades.[6] Partly functioning Forerunner ancillas were also brought to several armories on Qikost for studying purposes.[7] Throughout the Covenant era, Qikost acted as the primary spaceport for the entire Urs system.[5] At some point in its history, a civil conflict known as the Siege of Qikost took place.[8]

Throughout the Human-Covenant War, a group of Sangheili merchants lived on Qikost and engineered weapons for the Covenant arsenal, and have continued to do so for post-war factions following the war.[9]

When Sanghelios became embroiled in a civil war, a significant portion of the planet's population fled to Qikost, Suban, and other Sangheili colonies.[2] In the midst of this cultural and political upheaval, several of the keeps that controlled Qikost's war factories formed a consortium with the goal of establishing a discreet colonial independence for the moon-world. This act garnered a polarizing response from both groups on Sanghelios and even some residents and proprietors of the moon itself. With the rise of the Created and the following subjugation of the Urs system via Guardian, the widespread loss of communication and logistics infrastructure inhibited the independence efforts on Qikost, but key parties are still motivated to pursue this effort.[5]