Were you looking for Infection Form? 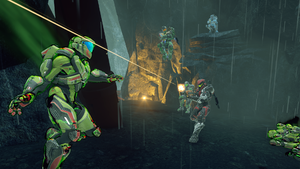 Infection is a multiplayer gametype in Halo 3, Halo: Reach, Halo 2: Anniversary, and Halo 5: Guardians.[1] It is the official Zombie mode, modelled after zombie mode's popularity as a custom game in Halo 2. In Halo 4, the gametype was tweaked and renamed Flood.

Players in Infection matches are split into two teams: the Survivors and the Zombies. When a survivor dies, they switch to the zombie team. A survivor's goal is to remain alive (i.e. "uninfected") until the end of the round, while a zombie's goal is to kill (infect) as many survivors as possible. When only one survivor remains, that survivor becomes the "Last Man Standing." The Last Man Standing can be given unique player traits; typically, these include a waypoint revealing their location to zombies, making survival an extreme challenge.

Typically, the zombies have melee weapons at their disposal and are capable of killing survivors in a single blow. Survivors are given short- and medium-range firearms.

Infection was available on-disc from launch day, but did not appear in Matchmaking until October 31, 2007, when a special Halloween playlist was introduced. This playlist permitted up to 13 players (it being an "unlucky" number) to play Infection; it was wildly popular and eventually became a frequently-recurring Double EXP Weekend playlist: Living Dead. Living Dead was ranked when it appeared on Halloween, and social on other occasions It offered a number of Infection gametypes, including "Save One Bullet" and "Brains."

Infection games have also appeared in other Double EXP playlists such as Turkey Day, the 2008 Thanksgiving weekend playlist.

Halo: Reach introduced the Safe Havens feature; maps had to be compatible with Safe Havens in order to support any Infection game variant, even when the Havens feature was disabled. Reach also introduced the "rebalancing" feature: if a zombie quit a match, a survivor would be forcibly converted to a zombie. Reach did not offer the Alpha Zombie feature on launch; it also did not offer the "Next Zombie" option due to technical limitations.

While Zombie Traits could be configured as normal, zombies' starting loadouts were harder to find: you had to edit the "Elite Loadouts" normally used for Invasion.

In the default Infection settings, zombies had the Evade armor ability, a higher movement speed, and lower gravity, which allowed them to rapidly approach survivors so long as they did not jump; conversely, they had no shields, making them constantly vulnerable to headshots. Survivors spawned with both shotguns and magnums, but weapon pickup was disabled, leaving them unable to acquire more ammo; even when they ran out of ammo, they could sometimes survive using sword block, a game mechanic unique to Reach. The default Safe Havens settings differed only slightly from Infection: survivors' damage output was reduced by half when outside of a haven, and survivors were granted invulnerability and standard damage output while inside of a haven. In May 2011, Bungie released an Infection game variant that implemented the Alpha Zombie feature; this variant's default settings gave Alpha Zombies unlimited sprint and forced color (red armor).

Halo: Reach offered Living Dead as a standard playlist available from launch day. Changes to Infection's settings and gametype script were distributed through this playlist; players who wanted to experiment with Alpha Zombies had to play the variant in Matchmaking and then save it from their Temporary History. Small changes were made to Infection's settings over time; for example, zombies had their gravity increased to normal and their jump height increased, to allow them to jump higher without being "floaty" and excessively vulnerable in mid-air. For the most part, though, Living Dead maintenance focused on patching the most egregious exploits in the playlist's maps, the overwhelming majority of which were not designed or significantly customized with Infection gameplay in mind.

Halo: Reach introduced three notable bugs; one of these was mitigated in Matchmaking, but none of them were ever truly fixed:

Infection returned as an official mode in Halo 2: Anniversary, offering a number of new features:

Infection was added to Halo 5: Guardians as part of the Memories of Reach update. 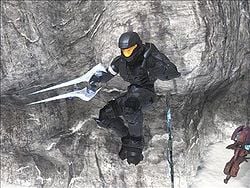 Zombies are often set to spawn with the classic Energy Sword.

A player camping in an Infection game.