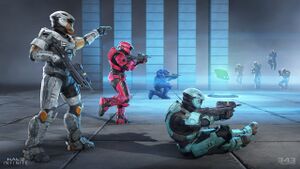 A promotional render for Land Grab.

Land Grab is a multiplayer gametype introduced in Season 02 of Halo Infinite during the Fractures: Entrenched event. It is a successor to the "Land Grab" variant of the Territories mode as featured in Halo 3 and Halo Reach, albeit spun off into its own standalone mode.

This mode revolves around capturing zones around the map similar to Strongholds, though designed to be better-suited for symmetrical maps.

At the start of each game, three neutral zones are spawned on the map for the teams to capture. When a zone is captured, it awards its team a single point and is 'locked', remaining inactive for the remainder of the set. When all three zones are captured, gameplay continues during a short intermission period before three new zones are created, starting a new set.

The first team to earn 11 points wins the game. When one team is up to 10 points at the end of a set, subsequent sets will only spawn 2 zones to capture. If both teams are tied at 10 points each, the final deciding round will feature a single zone to contest.

This mode is playable on all Arena maps, though in multiplayer playlists this map is only played on symmetrical maps.

This mode's primary designer was Mickey Cushing. The mode was designed as a variant of Strongholds that solves the issue of that mode being too rigid on symmetrical maps. The scoring system of playing for 11 points and reducing the number of zones when nearing the match point is intended to help create crescendos in the pacing of the game.[1] Catalyst was the first map that this mode was tested on.[2]