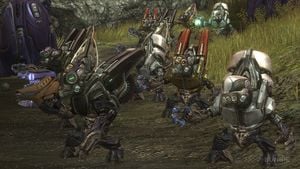 A group of Grunts in a match of Firefight.

Gruntpocalypse is a gametype in Halo: Reach Firefight where players must kill oncoming waves of Grunts until the Set ends.

Gruntpocalypse is similar to the Bonus Round featured in standard Firefight. In a Gruntpocalypse match, the player faces waves consisting entirely of vast numbers of Grunts instead of the regular sets of enemies.

All loadouts consist of the DMR and Magnum for easy headshots, with different Armor Abilities available.

On default, the grunts spawn on the ground, instead of dropping from covenant Phantoms as enemies in other modes do.

In score attack, the game consists of 120 Grunts that spawn in 5 waves, with the Catch skull, the custom Red Skull which enhances sight and hearing, the Grunt Birthday Party skull, and the Cloud skull.