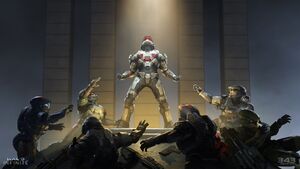 Last Spartan Standing is a multiplayer gametype introduced in Season 02 of Halo Infinite during the Interference event. It is considered a Free-For-All variant of the Attrition gametype, although it features several major mechanical differences.

Last Spartan Standing is played with 12 players on Big Team Battle maps. Players spawn with 5 lives each, and compete to secure grenades and equipment while eliminating other players.

There are no vehicle or weapon spawns on the map. Grenade spawns are random upon each respawn, and equipment is random and determined at the start of each map. Grenades will generally spawn in outdoor locations, while equipment will spawn indoors.

Ordnance pods will drop around the map at regular intervals, and will contain either a random powerup.

After one of three conditions are met (five minutes have passed in the match, all players are out of respawns, or only five players are remaining in the match), a circular Danger Zone will appear on the edge of the map and begin to constrict in phases to a random point on the map. Players who travel or are caught outside the Danger Zone's boundaries will slowly take damage until they either die or move into the safe area.

Throughout the game, players earn 100 points for securing a kill and 50 points for scoring an assist. Eliminated players drop their Personal AI, which can be secured by surviving players to earn 500 points.

Upon reaching certain point thresholds, players can upgrade their weapon loadouts by holding down the reload button. Levelling up will replace one weapon with a new one, in-general aiming to ensure players have one long-range and one close-range option at all times. Levelling up will also automatically reload the weapon players keep.

The winner is the final player to survive with all their lives. There is no time limit beyond the looming threat of the enroaching Danger Zone.

Last Spartan Standing was developed with Season 02: Lone Wolves in mind, aiming to create a Free-For-All mode that focused on securing kills. The mode was prototyped by creating a FFA variant of Attrition to play on Breaker. The lack of weapon and vehicle spawns aim to prevent players from hoarding equipment and avoiding risks, while the points system aims to encourage aggressive play and reduce "third-partying" (in which players focus on stealing kills from a safe position as their primary way of earning points).[1]