This article is about the gametype. For the short story, see Tug o' War. 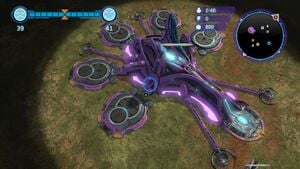 A Tug of War match on Pirth Outskirts.

Tug of War is a game mode in Halo Wars, obtained by purchasing the Strategic Options Pack. It was later included in the Halo Wars: Definitive Edition re-release.

Tug of War is a unique gametype, as the mode is won by having a stronger army than your opponent. Defeating enemies is essential, but success is determined by a combination of the army, buildings, and resources left standing in the end. Each unit, resource and building is assigned a numerical value represented by a bar at the top of the screen - the numerical total of a team determines how far in which direction a marker is pulled - the team with the stronger army pulls the marker further toward their side. When one side of the bar hits zero, the match ends.