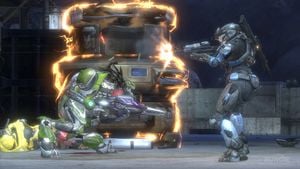 A match of Generator Defense on Waterfront.

Generator Defense is a Firefight gametype in Halo: Reach.

Generator Defense gametypes are playable in Firefight, which include Crashsite, Crashsite LTD and Genny Limited. On the defending team, Spartans fight waves of the Covenant troops, including Grunts, Jackals, Brutes and Hunters being led by player controlled Elites. Players are also able to customize the amount of Generators on the map.[1]

In the Halo: Reach Beta, the original version of the gametype was used to test the Firefight Matchmaking code for the final game. Due to this, it was alternatively referred to as "Network Test One" in-game.[2]

Generator Defense could only be exclusively played on the map Overlook in Halo: Reach Multiplayer Beta. Overall, the gametype is basically an attack-and-defend type of gameplay. There are only two rounds in the gametype; a total of five minutes in each round.

The defending team consists of three Spartans that defend a set of three generators, while the attacking team consists of three Elites that have to fight their way up to the generators. There are a total of three defense generators on the map which the Spartans have to defend. At the beginning of each match, several weapon caches will be distributed by a Longsword in different locations on the map; each weapon cache can potentially be a Spartan Laser, a Sniper Rifle, a Target Locator (Firefight only), or a Rocket Launcher. Each weapon cache will be dropped evenly around the map to allow both teams an equal chance of acquiring them. The defending Spartans will be able to lock the generators down -- hence, becoming invulnerable to attacks -- by pressing the action button near one. The lockdown lasts for 30 seconds and will start a cooldown time after the active time period.