The Weapon/Anti-Vehicle Model 6 Grindell/Galilean Nonlinear Rifle (W/AV M6 G/GNR), colloquially known as the Spartan Laser, is a man-portable and vehicle-mounted solid-state directed-energy anti-vehicle weapon used by the United Nations Space Command.[1][7] It is the only known directed-energy weapon manufactured by humans, aside from the plasma rifle protoype created by Chalybs Defense Solutions.

The M6 G/GNR was originally created in concert with the GUNGNIR Mjolnir armor variant as part of Project GUNGNIR, a program designed to provide supplementary matériel for the SPARTAN-II program, hence the "Spartan Laser" moniker.[8] The M6 G/GNR is a man-portable, shoulder-fired, directed energy weapon firing a solid-state laser.[1] The Spartan Laser's Grindell/Galilean architecture incorporates a smart-linked Wyrd III optics suite, capable of 3× magnification for increased accuracy.[1][2] Its reticule, whether on 1× or 3× magnifications, features a meter on the right side showing the charging status of the laser. The tick mark rests at the bottom of the circular shaped reticule while the laser is dormant, and gradually travels along the reticule's circumference until it reaches the point of origin, indicating that the laser is currently discharging.[9] Certain variants of the M6, the M6/V and the M6/X, are equipped with foldable targeting displays, allowing operators to target enemies without the use of smart-linking on their heads-up display.[10][5]

The M6 has gone through several iterations, but its changes have been mostly cosmetic.[4] For example, the M6/R variant used during the Human-Covenant War is powered by a BA-53635/PLMD non-removable battery, which recharges with a PP-16979/AM-Sh charger,[2] whereas the M6/X variant is powered by Series 6971 battery cells,[5] with little-to-no changes in performance.[11] Although the Spartan Laser was considered to be "ruinously expensive" at the time of its introduction, later refinements led to a reduction in production cost which is now only considered to be "extraordinarily expensive". Internal components have changed over time, incorporating incremental advances that have lowered production costs, and increased efficiency, but the significant advances in crystal doping and optoelectronic focusing remain largely opaque to end users.[6] 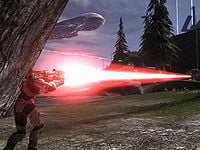 John-117 firing an M6/R during the Battle of Installation 00.

When the weapon is equipped, a shroud over the laser diode lifts up to expose it, presumably to protect it from scratches and battle damage when holstered.[Note 1] A small hydraulic or pneumatic cylinder on the left side of the shroud actuates the shroud where it is anchored to the chassis of the weapon. When the trigger is pulled, a red targeting laser is painted on-target accompanied by an audible whine as the weapon cycles up. The Spartan Laser will then charge for approximately three seconds before discharging the main laser. As the Spartan Laser charges, the charging tone gets noticeably louder and increases in pitch up until the laser is fired. The firing sequence can be aborted without discharging the battery as long as the weapon is not actually fired; for example, if the target moves out of sight or the operator needs to displace. Heat management forces significant downtime between shots, and so the weapon enters an approximately two-second-long standby sequence between shots.

When fired, the Spartan Laser emits a solid-state laser, a powerful microsecond-long pulse of energy capable of burning through thick plates of metallic laminates, nanocomposites, or hardened steel.[1] The beam can also penetrate multiple obstacles and/or targets, provided they are aligned along a linear trajectory. The beam emitted by the M6 Spartan Laser weapons is typically a bright red. The beam is capable of eliminating all manner of targets in a very large range. When used against infantry such as Jiralhanae Chieftains, the lasers is capable of efficiently burning through the armor and leaving a clean hole through the target and also severely damage anything behind the initial target. A single discharge from the M6/R is capable of piercing the thick armor of a Ru'swum-pattern Phantom.[2]

While there are multiple M6 variants to facilitate various specialized roles,[1] the M6 is typically used in both anti-vehicle and anti-personnel roles.[2] When employed in combat, the Spartan Laser had a marked effect on both allied and enemy morale.[2] During the Human-Covenant War, only Orbital Drop Shock Troopers and Spartans were given ready access to the weapon.[6]

There are four known variants of the M6 Spartan Lasers:

In addition, related technology has been observed on vehicle armaments:

Variants of the M6 Spartan Laser are featured as a usable weapon in Halo 3, Halo 3: ODST, Halo: Reach, Halo 4, and Halo 5: Guardians. They are known as the Spartan Laser. It is a power weapon, which fires a powerful laser that deals an incredible amount of damage, destroying all vehicles with a single well-placed shot. The Spartan Laser is one of the most powerful weapons in the game, and to compensate, it has a limited use of five shots, a short cooldown after a discharge, and inability to pick up ammo.