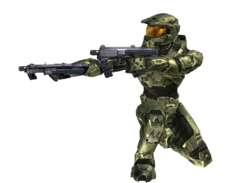 Dual wielding is a gameplay feature in which a gunman wields two weapons at once, one in each hand. The concept was introduced in Halo 2 and refined in Halo 3. Fully-featured dual wielding was made unavailable to the player in subsequent games before being revived in Halo 2: Anniversary, though it is occasionally seen practiced by NPCs and in cutscenes. Dual wielding returns as a prominent gameplay mechanic in Halo: Recruit.

Dual wielding allows a player to use two weapons at any time. This allows players to experiment with weapon combinations to achieve the most effective outcome in combat. The feature is restricted only to small firearms such as pistols and the SMG (See list of dual wieldable weapons). The Type-33 Needler was previously made available as a dual wieldable weapon in Halo 2 but no longer in Halo 3 to balance the unexpected ease of killing a target with two Needlers.

The feature is also made available to the Elites AI units in both Halo 2 and Halo: Reach. They are typically seen dual wielding a pair of Okarda'phaa-pattern plasma rifles on normal or higher difficulty.

There have been several minor changes made to the feature in Halo 3 from Halo 2. The primary difference between Halo 2 and Halo 3's dual wield is that the player can now fully control the reloading process. In Halo 2, the player is forced and strained to reload the two weapons simultaneously. In Halo 3, players could reload the left weapon first while keeping the right weapon ready, vice versa, or both at once, independent of each other. Another difference between Halo 2 and Halo 3 dual-wield is the alteration in the amount of damage dealt per weapon. In Halo 2, there is no change in the amount of shots needed to kill if you are single or dual wielding. In Halo 3, every weapon (with the exception of the Plasma Pistol) becomes imperceptibly weaker by varying degrees when it is dual-wielded. This becomes especially noticeable when Overshields are in use.

Dual wielding, as a player-accessible feature, was removed in Halo 3: ODST, Halo: Reach, Halo 4, and Halo 5. With regards to Halo: Reach, the removal was due to the new weapon sandbox which could not support the overall gameplay design. Similarly, Halo 4 does not support dual wielding.[Note 1]

The act of dual wielding is an ineffective practice with gameplay put aside. A regular shooter would not achieve the same accuracy as normal if he dual wields two weapons. There have been several occasions where regular individuals have successfully pull off this feat; Miranda Keyes dual wields a pair of M7 SMGs, and a combination of M6G magnum and an M90 shotgun to fend off Covenant forces during the battles of Installation 05 and Installation 00 respectively,[1][2] Gretchen Ketola dual wields a pair of SMGs in an engagement with Kojo "Romeo" Agu and Taylor "Dutch" Miles. Romeo later dual wields a pair of M6D magnums during the Battle of Ariel.[3] During Operation: SILENT STORM Sergeant Major Avery Johnson dual wielded M6C magnums.[4]

On the other hand, augmented humans such as the Spartan-IIs, Spartan-IIIs, and Spartan-IVs, and species with superior physiology such as the Elites and Brutes are able to put this practice to a considerable success.[Note 2][5] SPARTAN-IIs, SPARTAN-IIIs, and SPARTAN-IVs saw no reduced performance when they dual wield a range of weapons. For example, in an ONI-led operation, Kelly-087 was still able to keep up with Frederic-104 and John-117 whilst firing both of her Plasma Rifles. John-117 would later switch out his MA5C assault rifle to fire two M7 SMGs.[6] In another example, Douglas-042 and Alice-130 were able to perform acrobatic feats over and around the Elites while dual wielding their M7 SMGs as they tried to unload the UNSC Spirit of Fire's slipspace engine during the Battle of Trove.[7] Even Noble Six was still able to fend off several Elites while dual wielding an M6G magnum and an MA37 assault rifle before he was taken down.[8] Both Otto-031 and Linda-058 dual wield M6D magnums during the Battle of Line Installation 1-4 and the Fall of Reach respectively.[9][10] Samuel-034 dual-wielded M6G magnums during the Battle of Chi Ceti.[11] Spartan Sarah Palmer is shown to regularly dual wield M6H magnums.[12] Douglas-042 dual-wielded M6C magnums during the Second Ark Conflict.[13]