The M6H Personal Defense Weapon System (M6H PDWS) is a handgun in service with the UNSC. It is part of Misriah Armory's widespread M6 series. The M6H was infrequently in service as early as 2526[7][8] and was made the standard-issue sidearm of all UNSC personnel in 2555.[9]

The M6H is a semi-automatic, recoil-operated, magazine-fed handgun. It is an up-sized model (17% larger than standard versions) with a smart-linked KFA-2 x2 scope and an electroless nickel finish.[10] It fires the M6 series' standard 12.7×40mm ammunition. The M6H is effective at reasonably long distances as well as its preferred close-to-medium-range.[9] 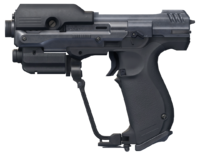 The M6H2 variant had entered service by at least 2557 and was issued to all branches of the UNSC.[5] It has a serial number of "00MA0100062473"[11] and sports a black polymer finish. Like the base M6H, the M6H2 is semi-automatic, recoil-operated and magazine-fed,[5] but has an increased 12-round magazine capacity.[4] The variant also boasts increased accuracy and is most effective with precision aiming.[5] It features a smoother slide design and a Projection sight (in place of the venerable KFA-2 x2) to support smart scope functionality.[4] In 2557, this weapon had a Ruptive skin approved by the UNSC Ordnance Commission.[12]

Changes from the M6G PDWS in Halo: Reach[edit]

Changes from M6H in Halo 4 to M6H2 in Halo 5: Guardians Multiplayer Beta[edit]