The M41 Surface-to-Surface Rocket Medium Anti-Vehicle / Assault Weapon (M41 SSR MAV/AW), formally known as the Medium Anti-Vehicle / Assault Weapon, Bore 102mm, M41 Surface-to-Surface Rocket Launcher,[12] and commonly known as the Jackhammer or the SPNKr (pronounced "spanker"), is a heavy ordnance weapon used by the UNSC and Insurrectionists.[10] It is manufactured by Misriah Armory.[1][4][8] Nicknames for the M41 SPNKr include Pain, Launcher, Breath of God, and Can Opener.[9] 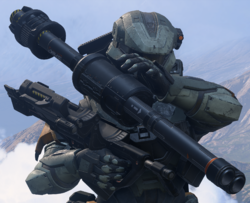 A Spartan-IV inserting the disposable twin-tube unit into an M41D SPNKr.

The M41 SPNKr is characterized by its two main components: firstly, a reusable launcher that opens and closes with a hinge mechanism, which encircles most of the magazine; secondly, a disposable magazine containing two rockets.[12][10] The launcher is shoulder-fired, and the wielder stabilizes the weapon by holding a foregrip extending from the trigger guard. The weapon uses a unique system for loading and firing: rather than using a traditional magazine or single-shot system, it is fed by a disposable unit with two tubes, each of which holds a single rocket. When one of the rockets is fired, the other is cycled into place; when both have been fired, the operator opens the launcher, removes the twin-tube unit to insert another, and then closes the mechanism around the unit. As such, the M41 is considerably portable,[4] allowing the operator to quickly reload while in combat and greatly reduces the weight he carries without throwing the weapon away. A self-test button on the weapon rotates the twin-tubes to ensure the mechanism will rotate as intended.[13]

The M41 accepts a variety of ammunition types, with the most common being the unguided M19 102mm surface-to-surface missile.[1] Other ammunitions include the M21 antipersonnel rocket,[7] guided missiles, and hunter-killer loitering munitions.[3]

Many M41s are equipped with a smart-linked fire control module and target tracking systems; these systems allow the operator to track a target, which often guarantees that the target will be struck, even if it attempts evasive maneuvers.[1] While the M41 rocket launcher is optimized for ground targets, engineers at Misriah Armory have developed tweaks,[5] integrating an enhanced tracking system on certain models of the M41.[4] Subsequently, some launchers are capable of tracking both ground-based and airborne targets,[14][15] while others are capable of tracking only aircrafts.[16] Some M41s lack any form of tracking technology, requiring the operator to "dumb fire" the weapon without targeting assistance.[17][18][19]

Multiple variants of the M41 have been observed, with functional and aesthetic differences. Although the M41D SPNKr has no magnification optics attached, it possesses a smart-linked fire control module. The M41D features a trigger guard, and an ergonomic thumbhole stock, adding the impression of greater bulk. However, the M41B model lack these design features, possessing only a pistol grip and no trigger guard, resulting in a more skeletal overall appearance.[4]

Though there have been various shoulder-launched rocket launchers in service with the UNSC Armed Forces since its creation, only the M41 rocket launcher has the tactical importance to be heavily manufactured.[5] The M41 SSR has been in service with the UNSC for decades since 2481,[3] predating even the Insurrection, during which it was used by the UNSC and the Insurrectionists.[10] Over time, the M41's role shifted from an anti-vehicular weapon to an all-purpose heavy weapon, even used in demolition purposes.[9] While it was obsolete before the Human-Covenant War began, it was not replaced by the M57 Pilum until the Created conflict to counter Promethean Knights.[10] However, even after it was replaced, it still saw use in War Games matches aboard the UNSC Infinity.[20]

The M41 SPNKr and its variants are featured as a usable weapon in most of the Halo games, starting with Halo: Combat Evolved and continuing through to Infinite. In most of these, it is known as the "Rocket Launcher", though Halo 5: Guardians calls it the "SPNKr Rocket Launcher" as the name "Rocket Launcher" was given to the M57 Pilum instead. It is a power weapon, which fires slow-moving rockets that deal an incredible amount of damage upon detonation, with a wide area of effect. The Rocket Launcher is one of the most powerful weapons in the game, and to compensate, it has a small magazine size, slow reload speed and ammo is generally very rare.