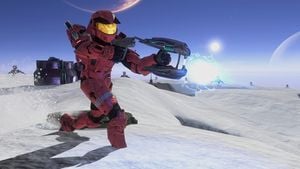 A player using a mix of armor sets in Halo: The Master Chief Collection.

Armor customization in Halo 3 allows players to customize their Spartan and Elite player model with a variety of armor pieces available to players. The feature is an improvement of Halo 2's player customization feature, and the first in the series to allow players to change the physical model of their character beyond species and colour selection. 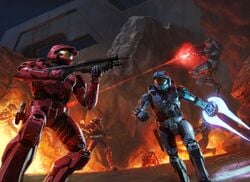 Artwork by Isaac Hannaford revealing the existence of Recon, long before the armor was officially announced.

Halo 3 features a number of armor selections for both Spartan and Elite player characters, unlocked primarily by accomplishing feats within the campaign, Matchmaking and earning achievements. It was first hinted at during the Halo 3 Beta, with the limited-access featuring the ability for players to customise their armour colouration and emblem - though no ability to customise armour permutations.[1][2] Hidden in the Beta's files were strings referencing the in-development names for the multiplayer armours, with some modders able to figure out the existence of a potential armour customisation system ahead of the official release.[3]

The system was initially unveiled in the July 2007 issue of GamePro, featuring a handful of images of the EVA and CQB armor sets alongside the standard Mark VI, though was noted by Bungie to not be the full set of armor available in game.[4] Bungie later officially announced the inclusion of Elite armor variants[5], and on Bungie Day 2007 officially unveiled the CQB and EVA permutations' visuals and lore. A piece of art illustrated by Isaac Hannaford released at the same time additionally revealed the existence of the Recon armor, though the armor was not specifically called out by Bungie or given any attention until later.[6][7]

In total, there are 17 armor sets included in Halo 3, 12 of which for the SPARTAN-II character model and 5 for the Elite character model. These armor permutations are organized into three categories: Helmet, Chest and Shoulder. Certain armor permutations can only be unlocked by completing the game on certain difficulties, accumulating certain Gamerscore, or by obtaining certain multiplayer-specific achievements. Some, such as Recon or the exclusive Bungie Armor, have more esoteric unlock requirements, and can only be granted under certain conditions. Additionally, some Spartan armor sets only contain a helmet piece or chest piece, with no other associated armor selections.

Note: The below unlock requirements only apply to the original Halo 3 game on Xbox 360 or via Xbox One backward compatibility. In The Master Chief Collection, all armors from Legacy Halo 3 are unlocked by default for all players - including the Bungie armor.
Spartan armor
Elite armor 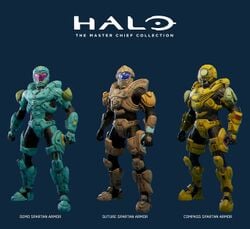 The Demo, Suture and Compass armors introduced into Halo 3.

For the Halo 3 multiplayer component of Halo: The Master Chief Collection, all armor - including Recon and Bungie - was unlocked for all players for use by default. Between the game's launch in 2014 and the launch of Halo 3 on PC in 2020, armor customization was limited to full sets with no mix-and-match customization, due to the difficulties of running multiple engines in the menu component. In this launch rendition, the armor sets were displayed in the menu as static renders, with the armors using full armor sets or - in the case of armors with no associated armor for chest, helmet or shoulder elements - Mark VI to supplement missing elements. As such, using a helmet such as Mark V or ODST required the usage of all Mark VI for everything else. Using the Katana chest, however, would use Hayabusa for all other armor elements. Additionally and for the first time, The Master Chief Collection allowed players to use the Bungie Armor (now renamed "Flaming Head"), and would display the characteristic flames and EOD chest as it did in the original game, though with enforced Mark VI shoulders and helmet.

Following the launch of Halo 3 on PC and start of Season 2: Spark, this system was updated to display Halo 3 character models in Unreal Engine 4, with full customization in-game as it was at the launch of Halo 3. In this change, the Bungie Armor chest was renamed "Legacy", and the Security armour set was given a chest armour piece; in launch Halo 3, equipping the Security helmet additionally outfitted the chest with a small antenna. Following the Season 2 update, the antenna is now considered a separate chest, and can be used regardless of helmet.

With the launch of Series 3: Recon, Halo 3 customisation was updated with the inclusion of skins for application on a player's weapon and several new visor colour options for use with all helmets. The full list of Halo 3 skins can be viewed here.

In the Season 4 December update, Halo 3 was expanded to include new techsuit customization, with the players being able to change it between a new Halo 3 techsuit and Halo 4 techsuit (both colored and full black).

Series 5: Anvil included twelve new armor permutations for Halo 3, originally created for the cancelled Halo Online. Additionally, included new forearm and leg customisation, allowing players to choose between the new twelve armors or the default Mark VI. These armors can be toggled off for a more classic experience, with any players using Halo Online armor instead displaying as default Mark VI.[8]

Series 7: Elite saw the inclusion of seven new Halo Online armor permutations for the Elites. Additionally, it will include new forearm and leg customization, allowing players to choose between the new seven harnesses or the default Combat harness. The season also added seven new techsuit options. Series 8: Mythic will include new armor, visors and back accessories alongside skins for weapons and vehicles.[9]

For Halo's 20th Anniversary, a new armor permutation was added: the Mirage armor, based on the Semi-Powered Infiltration armor used by SPARTAN-IIIs.[10]

Non canonical armor sets that were introduced with Series 8: Mythic.

Visor customisation was introduced to Halo 3 in Series 3: Recon. A number of visor colours can be unlocked for

Season Points, though like other Halo 3 skins, they can be toggled off in the menu. Season 6 introduced more visors in the form of animated visors.

Back Accessory customisation was introduced to Halo 3 in Series 6: Raven.

As of the December 2020 update, Spartans in Halo 3 can now choose between three different techsuits to display underneath their MJOLNIR armor. Season 6 will include three new colored techsuits, with these techsuits not inhereting the player's primary color. These include the following;

Pose customisation options were introduced to Halo 3 in Series 8: Mythic.