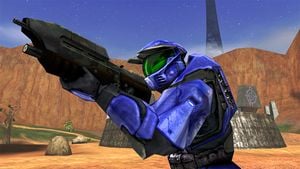 Armour colour customisation has existed in CE since its initial release on the Xbox in 2001, and has remained unchanged since. It allows players to pick the colour of their entire armour set, with the exception of the undersuit and certain sections of the bracers and greaves, which will remain black regardless of colour choice. Unlike later games, no secondary or tertiary armour colours are available; the entire armour will be coated in a single colour. The set of colours available has not changed between any of the ports, remasters and rereleases of the game.

A total of 18 colours are available for use in CE:

MCC Colour names that were used by MCC at launch, before later being updated to match the original CE names.

On the 13th of June 2020, alongside the launch of Series 2: Spark for Halo: The Master Chief Collection, 343 Industries retroactively added the ability to customise the player's helmet visor colour, first introduced in Halo: Reach, into the MCC port of Halo: CE. This was alongside a larger update to MCC CE's cosmetic customisation options, which also added weapon and vehicle skins. To allow players to experience the game as it originally released, a toggle was implemented that allows players to hide all new skins and visors and show only those customisation options that were available at the launch of the original game.[1] These options are specific to MCC CE, and do not exist in CE on Xbox, its original PC and Mac ports, or the Xbox 360 remaster, Halo: CE Anniversary.

A total of 30 visors were added, making for a total of 31 including the default visor (which remains unchanged from the original game):