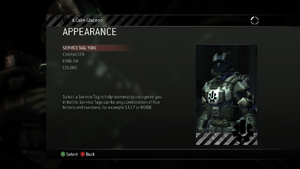 The customization menu in Halo 3: ODST.

Halo 3: ODST features a simplistic armor customization where one can play as each member of the Alpha-Nine, with each having their own unique aesthetic Bungie-created armor in the game's Firefight mode. Players can choose primary and secondary armor colors, but the armor's main color remains the same (dark gray). Players can also choose whether or not to wear a helmet, unless they are playing as the Rookie or Sergeant Johnson, who cannot remove his helmet and cannot put one on, respectively. Choosing not to wear a helmet does not affect gameplay. Without a helmet, the player still has the same health and stamina, and they can still use VISR mode. Each character has their own unique lines of dialogue which play during gameplay, similar to the Firefight voices added in Halo: Reach as an unlockable item.

Season Points. The Master Chief Collection additionally features two skins not available in the base game; the injured Romeo model (as seen following the level NMPD HQ in-game) and a "bug-splattered" Buck, seen in Data Hive and Coastal Highway. The game also features Sergeant Johnson as purchasable for all players, previously restricted to a pre-order exclusive in the original game. Additionally, The Master Chief Collection features the helmet-less edition of each character as a separate unlock to their helmeted incarnation, unlike the original release which only had the helmet-on option as a toggle that was available at any time.

Rookie
Halo 3: ODST: This Trooper recently transferred from the 26th Marine Expeditionary Force, part of a Rapid Offensive Picket that suffered near-annihilation at New Jerusalem, Cygnus. Like most ODSTs, his actions speak louder than words.
MCC: The strong, silent type.
Mickey
Halo 3: ODST: Despite limited formal education, Mickey scored high enough on his conscription exams to qualify for flight school. But heavy air-unit losses (Pelicans especially) left Mickey without a bird to fly. His current operational speciality is bomb disposal.
MCC (helmetless): I know, I have beautiful eyes.
MCC (helmet): Killing the Covenant in the face is my favorite pastime.
Dutch
Halo 3: ODST: A man of strong convictions, Dutch volunteered in time to participate in the failed defense of Tribute. The fleet covering the colony's evacuation suffered losses exceeding 90%, a sacrifice that gave Dutch abiding respect for his Navy brothers.
MCC (helmetless): I didn't train to be a pilot.
MCC (helmet): Relax, what could go wrong?
Romeo
Halo 3: ODST: In his old unit Romeo racked-up multiple code of conduct violations, any one of which should have resulted in demotion -- or worse. But this late in the war, the UNSC needs all the battle-tested snipers it can get. And Romeo is one of the best.
MCC (helmetless): If you have something to say, you can say it to my face.
MCC (helmet): Wake up, buttercup.
Buck
Halo 3: ODST: Counting time spent in cryo-sleep, Buck is a 25 year veteran of the war. He participated in the liberation of Harvest but also the fall of Reach. Watching so many Marines die has left Buck thick-skinned and short-fused. But this wasn't always so.
MCC (helmetless): 188 centimeters of smoldering handsomeness.
MCC (helmet): When the helmet is on, the party is on.
Johnson
Halo 3: ODST: Avery Johnson was born on Earth in the late 25th century. Since then, he's kicked all kinds of ass from one end of the galaxy to the next. He enjoys sniping, smoking Sweet William cigars and obliterating ancient, ring-shaped artifacts.
MCC: I know what the ladies like.
Dare
Halo 3: ODST: Most of her dossier is classified, but Dare is a known Naval Academy Graduate amd former Intel Officer on the heavy frigate[sic] 'Say My Name', one of two ships from the Harvest campaign still in service. Dare is now assigned to ONI Section One.
MCC (helmetless): We have a mission to accomplish, let's get to it.
MCC (helmet): Working with ONI demands a certain level of anonimity.