Armor customization in Halo 2: Anniversary allows players to customize their Spartan and Elite player model. Following in the footsteps of Halo 3, and Halo 4, the customization system would be revamped and overhauled following Halo: The Master Chief Collection's launch in 2014.

The customization menu for Halo 2: Anniversary, following its overhaul for Series 3.

Upon launch, Halo 2: Anniversary originally featured six basic armor sets, split between Spartans and Elites. The Spartan and Elite's visual styles were rooted in the aesthetic of MJOLNIR Powered Assault Armor [GEN2], and the Covenant remnant introduced in Halo 4, respectively. Originally, the armor players could use in Anniversary were locked to pre-made armor sets, lacking any customization whatsoever. Additionally, the six base sets were freely unlocked, with no prerequisites present for their use.

With 343 Industries celebrating the 20th anniversary of Halo in late 2021, a new armor permutation was added to Halo 2: Anniversary: the Orion armor. ORION is based on the armor used by the Master Chief, seen during Halo's reveal in 1999, and was made available through The Exchange exclusively.[2]

The launch of Series 9 in 2022 saw the release of several new Fractures armor sets for the game's customization suite; Trooper, Megaframe, Panzerdoll, and Bioroid. Additionally, a new canon armor set, Breach, was added - with its design being based on unused Halo 3 concept art.[3][4]

A series of Fractures-based armor sets introduced during Series 9. 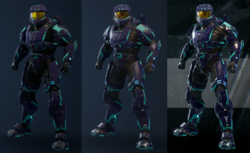 Notably, the Unreal Engine 4 models for both Spartans and Elites got overhauled over time. Upon Halo 2: Anniversary's PC release, all six models were of lower quality, lacking the shiny, metallic nature of the actual, in-game armor, while the techsuit featured a predominantly deep black coloration, with a slick sheen that isn't present in-game. With the release of Series 3, the models would all be updated, featuring higher quality assets overall. The metallic shine present on in-game armor would be added, and the techsuit would be rendered in a gray color, featuring a more game-accurate techsuit. Series 8 would update the models again, amplifying the armor's shine, while also returning the smooth sheen once present on the techsuit.

Additionally, during Series 3, when the options for customization were initially widened, the player's Spartan's bicep armor was determined by their choice of wrist armor, not by their shoulder armor. Eventually, this would be changed, and swapping shoulder pieces would also swap the bicep armor underneath it. 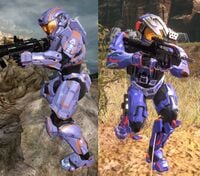 Two Spartans featuring the same colors, the left being pre-Series 8, the right being post-Series 8.

Finally, in a first since Hammer Storm, the release of Series 8: Mythic would see the colors the player could select being altered, with each being darkened dramatically compared to its pre-Series 8 counterpart. This change resulted in more visual parity between the Unreal Engine 4 render and the in-game character model. It also would not be noted in the Series' patch notes.