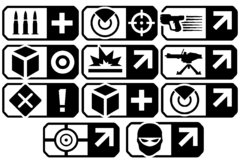 All the icons of the Support Upgrades.

Support upgrades are armor mods for the MJOLNIR [GEN2] armor that enhance a Spartan's combat performance in the field. They can be accessed through each loadout before a match is started or during a player's respawn time. While some support upgrades are available since the beginning of the game, others are unlocked via Specializations.