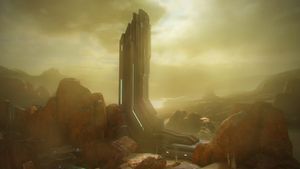 The Vale Citadel's main tower in the canyon.

The Vale Citadel,[1] also known as the Librarian's Rest by Jul 'Mdama's Covenant,[2] was a location inside the Forerunner shield world Requiem.[3]

The Vale Citadel was a Forerunner structure that notably contained the controls for Requiem's automated particle cannon network, which defended the gravity well nearby. The structure was situated within a canyon, with its entrance accessible via a series of Forerunner platforms built into the canyon. The interior of the structure featured cavernous hallways connected by elevators.[3] The Vale Citadel hosted a device inholding the Librarian's imprint and later became a major emplacement in the conflict opposing the United Nations Space Command to the reformed Covenant.[4][5][6]

During the Requiem Campaign, the UNSC designated the structure's entrance as "Sniper Alley" UNSC due to the Covenant frequently deploying Kig-Yar Snipers at the location.[4][5][6] A particular device inside the Vale Citadel, which contained an imprint of the Librarian, was seen as a shrine by the Covenant, thus the structure became known as the "Librarian's Rest".[2]

Near the end of the Forerunner-Flood War, the Librarian imprisoned the Ur-Didact within Requiem. Before she left Requiem, the Librarian left an imprint of her mind inside Vale Citadel. The imprint would guide humanity on their path to the Mantle by communicating with Spartan-II John-117 and Dr. Catherine Halsey, when the two individually accessed the structure in 2557 and 2558, respectively.[3][7]

In July 2557, during the Battle of Requiem, the stranded UNSC forces from UNSC Infinity deduced with telemetry analysis that the Vale Citadel was the command post that controlled the particle cannon networks defending Requiem's gravity well. The Captain of UNSC Infinity, Andrew Del Rio, sent John-117 and Gypsy Company to neutralize the particle cannon network. John-117 fought through the defending Promethean and Covenant forces outside the Citadel, and eventually entered the interior. Inside, John-117 was led into what the Covenant called the "Librarian's Rest". Inside the shrine, the Librarian revealed to him the truth about the ancient humans and asked him to stop the Ur-Didact. She provided him an immunity to the Composer, but was unable to tell him more as her husband had found them. The Chief then left the structure.[3]

In February 2558, during the Requiem Campaign, both the UNSC and the Covenant sought the Librarian's imprint, but Jul 'Mdama's forces were the first to find "Librarian's Rest." However, the shrine's activation required a Reclaimer. Using a Forerunner artifact which was brought onboard the UNSC Infinity by its crew, the Covenant managed to abduct Dr. Henry Glassman and forced him to work on opening the shrine. They thought the Librarian would gift them incredible bounties spread throughout the galaxy, such as weapons and ships.[8] Despite lacking adequate equipment, Glassman managed to activate the shrine. When all the Sangheili were captivated by it, he escaped with the help of Spartan Gabriel Thorne who had been captured and taken to "Librarian's Rest." However, Glassman only managed to activate the shrine's protective shield rather than the ability to enter it.[9]

The Librarian reveals her plan to Dr. Halsey.

Later, after an attack on the Infinity, the Covenant abducted Dr. Catherine Halsey to help them unlock the structure. At "Librarian's Rest," Dr. Halsey deactivated the protective shield with her data pad. She then quickly ran into the beam of light before 'Mdama.[10] Inside the shrine, Halsey met the Librarian, who offered her the two halves of the Janus Key, an artifact capable of locating every pieces of Forerunner technology in the galaxy. She asked her to bring it to the Absolute Record to help mankind. Halsey was subsequently expelled from the shrine.[7]

Once Dr. Halsey was expelled from the shrine, 'Mdama took the red half of the key, while the doctor tossed the blue half to Gabriel Thorne, who had just arrived. Commander Palmer and the rest of Fireteam Majestic then arrived and clashed with Sangheili Storm and Promethean Knights. 'Mdama was able to escape with a wounded Dr. Halsey thanks to a Knight who translocated them away, resulting in the failure of the Spartans' mission.[7] As all the enemies were either dead or gone, the Spartans-IVs left the "Librarian's Rest." Later, as the Librarian had predicted, Requiem was set on a collision course with its sun, which ended in the destruction of the shield world,[11] but not the Librarian's imprint as she had been transferred to the Absolute Record with the help of Fireteam Crimson.[2]