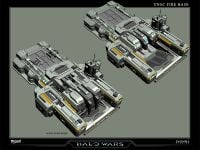 A UNSC Firebase, a military variant of the Colony Starter.

A colony starter unit is a structure capable of being deployed by UNSC colonization teams during the buildup of initial settlements on a planet's surface. Constructed from polycrete, and powered by a small hydrogen reactor, they were extremely useful during the UNSC's campaign to put down the Insurrection, with modified versions of these forming the basis for the Firebase.[1]

The military variant of the colony starter unit starts as a Firebase featuring 3 sockets for buildings and none for turrets. After upgrading once the base has 5 sockets and 4 turret sockets. After the final upgrade it has 7 building sockets but still only has 4 turret sockets.