This article is about the Halo Wars 2 campaign level. For articles of the same name, see Last Stand.

Last Stand is the twelfth and final campaign level in Halo Wars 2.

Hold out against the Banished long enough for Anders to complete her mission.

Make sure you use the Spirit of Fire's full arsenal to support your troops, we won't have access to a firebase.

Two Pelicans land at the LZ south of the Control Room and drop squads of Marines.

The Marines, Hellbringers and Red Team form a defensive perimeter around the Control Room where Anders is inside. An energy shield suddenly emerges, covering the Control Room.

Cutter informs the player that the Banished are approaching.

Red Team and the Marines hold off the Banished assault from all directions.

Red Team and the UNSC forces start splitting in two to defeat the Warlords while defending the Control Room. Meanwhile, new reinforcements of Marines and Cyclopes arrive.

Red Team and the Marines assault the Warlords' encampments and eventually defeat them.

New reinforcements of Nightingales, Gauss Warthogs and Scorpions arrive from the ship at the LZ as the UNSC continues to hold the line.

The Banished keep coming from every direction, but Red Team and the UNSC forces continue to deny their access to the Control Room.

If the Banished attack the Control Room.

If the shield drops below 40%.

The Banished continue to attack from all directions and new UNSC reinforcements of Grizzlies arrive.

The Banished start sending Sangheili Rangers and Reavers to the battlefield while UNSC Hornets and Nightingales arrive.

Locusts and Hunters start attacking the Marines and later, new reinforcements of Wolverines and Kodiaks arrive at the LZ.

After succeeding in repelling the wave of Locusts and Hunters, a Barukaza Workshop Scarab appears and the screen moves to show the incoming Scarab from the north.

Screen moves to the Condor Gunship that has just arrived from the south.

UNSC forces quickly assemble the units and eventually defeat the Scarab with the help of the Condor.

Anders finishes the first stage of her work. The control platform she is standing on descends into the ground.

More Banished units are incoming, including Banshees. The UNSC forces quickly repel them and the Spirit of Fire dispatches two Vultures, some Hornets and Nightingales to the Control Room.

Later, the Banished have started sending in artillery units.

A Gydrozka Workshop Blisterback arrives through the air and starts attacking UNSC forces as soon as they land.

In response to Cutter's notice, Atriox sends three Scarabs from the north.

The timer starts to count down from two minutes. The UNSC quickly musters their forces and defeat the three Scarabs that enter the battlefield from the north. The timer finally reaches 0.

Cut to an orbital view of the Spirit of Fire hovering near Halo, overseeing it floating high above the Ark's surface. The view slowly zooms to one of the landmasses upon the ring.

Cut to a forest on the surface of the Halo. A Jiralhanae trooper, wielding a Brute Shot, pants and sprints to a tree for cover while some are hit by UNSC gunfire. Gunfire is heard around it. As other Brutes around it defend the position and fires back, Blisterback reinforcements land.

Cut to a panning shot of the human side of the battlefield. UNSC troopers fire from emplacements as they fill the emplacements one after another, firing to suppress the Banished, a Warthog skids up to support them.

Continue panning right. A Pelican arrives and drops off a Scorpion in a cloud of red identifier smoke.

Another Warthog arrives, and Jerome leaps out from its gunner seat. He walks forward and draws his rifle.

Cut to inside the Halo's Control Toom. Anders stands by a hologram of the Ark and the Halo above it.

At the control terminal, Anders pulls forward a section of the Halo, magnifying it. Banished forces are marked in red dots while UNSC are marked in blue dots on its surface. Anders reaches forward and draws a circle around the Banished, and the hologram adjusts its borders to contain the entire army. The Control Room begins to shake.

Cut to the surface. A shield wall erupts around the Jiralhanae troops, trapping them inside. They look around in confusion and a Blisterback fires its missiles, but the shield is unscathed.

Cut to Anders, who puts her hand under the marked subsection. She slowly lifts her hand to push it upward.

Cut to the surface, as the surrounded ground begins to rise. The Banished troops are trapped aboard as it rises above the ground.

She pushes up, and the landmass is flung into space. The shield dissipates, and the Marines watch the landmass fly high into space. Cut to an orbital view of the ring, where the ejected landmass crumbles from air pressure. 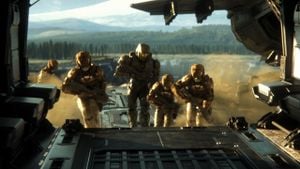 Jerome and his Marines climb onboard a Pelican.

Cut to an interior view of a Pelican's open troop bay. The Marines and Jerome walk inside. Jerome stands by the door, watching the enormous hole in the ground left from the ejection. The Pelican's bay door closes.

Cut to the Control Room.

Anders brings up a hologram and inspects it.

The hologram depicts an enormous slipspace portal opening above the ring.

Cut to in orbit above the Ark. The Halo is being pulled towards the slipspace portal, as the Spirit of Fire watches nearby. Cut to the ship's bridge, as Captain Cutter watches the ring pass.

The ring is swallowed and the portal closes up. Cutter and Isabel watch as the Spirit of Fire floats alone over the Ark.

Cutter continues to watch out into space, but then turns to Isabel.

The topographical map of the Ark's surface appears on the holo-table. Troop positions and key locations are marked.

Pan to the left over the map. It flickers as the shot changes from Cutter's blue map to Atriox's red one. The map stutters and malfunctions thanks to Atriox having just punched it. He grind his fist further in frustration.

Atriox growls as the map shuts off. He turns to face his army under the cliff below, still massive and filled with troops, bases, and Scarabs. As he watches over, a Banshee squad flies by.

Cut to within slipspace, as Anders' ring speeds through the galaxy. Stars streak by over the ring's trees.

Cut to the Control Room. The hologram of the slipspace transit shrinks and slow. A Forerunner symbol appears in the hologram near the ring.

Behind her, the Control Room's elevator descends. Anders turns and walks toward it.

Cut to the ring's surface. It is dark, as Anders steps cautiously through the forest. As she looks around, reaching the edge of the hole she created, a bright flash of light occurs. It's an object coming out of slipspace. Anders shields her eyes, then looks up as it approaches.

She faces up to see an enormous Guardian.

Note that in this level, all Leader Powers have been upgraded to maximum level without the need to earn and spend leader points.