Jul 'Mdama: "Where is this place? I was told it was called Kelekos. But that was the Forerunners' sacred name for it."
Kaidon Panom: "This is Hesduros."
— The meeting between Jul 'Mdama and the Sangheili of Panom.[3]

Hesduros, known as Kelekos to the Forerunners, is a remote planet in former Covenant space colonized by Sangheili.[4]

Hesduros possesses a dense atmosphere.[5] The supercontinent, Vakkoro, occupies much of the northern hemisphere.[5] Stone Forerunner ruins are a common sight on Vakkoro. At least two sites with obvious Forerunner architecture are built around slipspace portals that link Hesduros to other worlds. Keeps are often organized into small settlements with modest, multiple story stone buildings. As well, there are a number of fortresses on its surface. Flora on Hesduros include varieties of trees and grasses. Species similar to birds and insects also call the planet their home.[3]

"We will seek the Didact, and ask for his help to cleanse the galaxy of humanity."
— Kaidon Panom's words give birth to a new Covenant.[3]

Then known as Kelekos, this planet was once a well-known part of the Forerunner Ecumene. There was a relatively high number of Forerunners whom called Kelekos home. Multiple portals were constructed on the world, one of which was linked to the enormous Shield World 006.[6]

Many thousands of years after the firing of the Halo Array, Kelekos was colonized by Sangheili of the Covenant and renamed Hesduros.

After the empire's collapse, Jul 'Mdama arrived in the state of Panom on April 1, 2553 via the portal from the aforementioned shield world. There, he met the leaders of Panom keep and learned that they had not been in contact with the wider Covenant for over a year and were quite unaware of the events surrounding the Great Schism and the end of the war with the humans. 'Mdama noticed that glyphs at two locations with portals were identical to those he had previously identified as representing the Didact and Requiem. In addition, what appeared to be coordinates revealing Requiem's location were also present. By exploiting the religious devotion the residents of Panom and Hesduros-at-large had to the Forerunners, Jul convinced them to join him in seeking out the Didact, believing that if he existed he may be a powerful tool to unleash against humanity. This signaled the genesis of a new Covenant faction following the end of the Great War.[7] With Hesduros as a base of operations, Jul's Covenant grew by leaps and bounds and the colony profited in turn. His Covenant built up factories of war whilst using the planet as its base and used its denizens as laborers.[8] The poor assortment of ships Hesduros had previously had was greatly improved by Jul's crusade and by the start of 2557 the sect and where it was based was known by many.[9]

At some point in 2557, the Swords of Sanghelios launched an assault on Hesduros with the intent of killing 'Mdama and destroying his Covenant for good.[5] The offensive devastated multiple redoubts, including Panom Keep, but Jul was able to escape. The defeat did force his faction to abandon Hesduros entirely, however[5], later going on to regroup at Kamchatka.[10] In September of that year, the Servants of the Abiding Truth arrived at the planet in the Song of Wrath, led by none other than Jul's own son: Dural 'Mdama.[5] The kaidon of Panom was displeased to be met by another 'Mdama, but Dural convinced him to allow them access to the portal from which his father had emerged years prior. With assistance from a Huragok, a small strike team traveled through the portal to Sarcophagus.[8] The majority of the forces brought by the Servants soon followed, with those few that remained only doing so in order to hide the Song of Wrath on the planet and await further instruction.[11][12] As a gift to kaidon Panom, Dural left his keep vehicles and weaponry which could be used to defend it in the future.[8]

Following Jul 'Mdama's death in October of 2558, some members of his Covenant desired to regroup at Hesduros to plan the next course of action. However, rather than being dishonored by a retreat, the faction instead launched a deperate attack on the Swords of Sanghelios on Sanghelios itself. This, coupled with the prior destruction of the last military fortresses remaining to the group on Hesduros, ultimately led to the final destruction of Jul 'Mdama's Covenant and the scattering of its surviving members.[13][14] Though Jul 'Mdama is gone, Hesduron zealots still seek to return all Sangheili to the path of Forerunner enlightment—by force if necessary.[1]

"Our forefathers left Sanghelios generations ago. We sent sons to the war, but we have heard nothing for a year of more."
— Kaidon Panom.

Hesduros is a remote colony that is rich in history but was always poor in terms of political power in the Covenant. The Sangheili that flocked to it were known for being insular and conservative. It contributed to the war effort in recent years by providing fighters, including zealots. Zealots from Hesduros can be recognized by the unique combat harnesses they wear.[15] Though the colony sent sons to fight humanity, believing that they were doing so in service to the gods, it had not even heard from any other locations in over a year by the time Jul arrived there. A channel of communication could have been opened by the residents at any time, even with their outmoded technology, but never had been.[3] This reflects the degree to which the Sangheili of Hesduros preferred their own company and isolated lifestyle. The entire colony supported Jul 'Mdama in his quest to find the Didact and exact vengeance on the humans and those supporting them, but once more found itself being led by individual clans and keeps after his vision came to ruin.[1] The small and remote province of Panom lies on the edge of a densely-forested region of Vakkoro. Despite initially following Jul eagerly, the Panom Sangheili at the very least subsequently came to resent how he built up their world and then abandoned it after the Arbiter attacked.[5]

Following Jul 'Mdama's acquisition of the colony for use as his base,[8] Hesduros became home to manufactories which produce particle beam rifles,[16] plasma pistols,[17] Okarda'phaa-pattern plasma rifles,[18] and D'nomlhe-pattern Banshees.[19] The Type-25 plasma pistols made on the colony fire more powerful shots than others of the like and require comparably more energy each time they are fired. This variance is a result of the loss of the centralized manufacturing control that had previously been enforced by High Charity.[17] The design of the Hesduros-pattern Banshee hearkens back to earlier versions of the flyers which once dominated the skies of Sanghelios. Freed from the restrictions that had been placed upon them by San'Shyuum bureaucrats, those produced after the colony learned of the Covenant's demise sported numerous improvements, such as integral energy shields.[19] 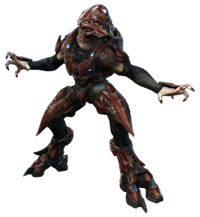 "Who are you, and why do you dare defile the holy gate? Rdolo says you stepped out of the sun. Answer me, because I want to know the names of the blasphemers I kill."
— Kaidon Panom upon first meeting Jul.

Hesduron Sangheili tend to be extremely religious and the entire culture on the planet is shaped significantly by the monasticism sought by those who originally settled it. Hesduros has always been a haven for traditionalists and isolationists. Worship of the Forerunners as gods is taken for granted and many from the colony wish to actively enforce their beliefs on other Sangheili who have strayed from orthodoxy. The colonists refer to the portals on the planet as "holy gates" and pronounced anyone whom attempted to access them defilers or blasphemers.[3] When Jul emerged from one of the holy gates, it was taken as a sign that the gods had sent him to them. Writing left behind by the Forerunners on Hesduros which spoke of a holy warrior caused a doctrine to develop concerning the imminent return of this Forerunner to aid the faithful in their hour of need.[3] Monks on Hesduros adorn themselves with glyphs of Forerunner script.[3]

Unlike some other colony worlds, on Hesduros children do not grow up with knowledge of who their father is, in accordance with the ancient tradition kept on Sanghelios. They also are taught martial training with wooden practice weapons from an early age. When Jul 'Mdama first traveled to Hesduros, he did not recognize the accents used by those he met in Panom.[3] A blade-like "talon" found on the armor worn by Hesduron zealots is derived from the armor of the planet's kaidons.[15]