The Arab Republic of Egypt, or simply Egypt, is an African nation on Earth.

"These are pre-Covenant Sangheili ruins. They were already ancient history before humanity built the pyramids."
— Spartan Olympia Vale comments on ruins on Sanghelios, comparing them to the pyramids of Egypt to signify their great age.

The Great Sphinx and the Pyramids of Giza during the time of Ancient Egypt.

Ancient Egyptian civilization coalesced over 6,000 years ago[note 1] with the political unification of Upper and Lower Egypt under its first pharaoh, Menes. Predominately native Egyptian rule lasted until the conquest by the Achaemenid Empire in the sixth century BCE. In 332 BCE, Macedonian ruler Alexander the Great conquered Egypt as he toppled the Achaemenids and established the Hellenistic Ptolemaic Kingdom, which was eventually annexed by Rome. After the Islamic conquest of Egypt, parts of it became provinces of successive caliphates and other Muslim dynasties until it was absorbed into the Ottoman Empire. Egypt fell under the control of the British Empire in 1882 but in 1953 the independent Arab Republic of Egypt was formed. In 1945, Egypt was a founding member of the United Nations. After the eventual unification of Earth's nations under the Unified Earth Government, Egypt's strategic location became vitally important to the United Nations Space Command.[1] An orbital defense platform was constructed to orbit its capital city geosynchronously[2] and when the Covenant attacked in 2552, Cairo Station served as flag headquarters.[3] 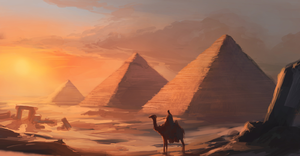 A depiction of a traveler on a camel riding past a trio of pyramids, as glimpsed by 343 Guilty Spark upon accessing data concerning human history on the UNSC Pillar of Autumn.[4]

Egypt is a transcontinental nation; it possesses a land bridge between Africa and Asia, traversed by a navigable waterway that connects the Mediterranean Sea with the Indian Ocean by way of the Red Sea. It is bisected by the Nile River.[1] The majority of the country is arid desert, but oases and the region along the Nile could be called tropical.[1] Its capital city is Cairo, located near the Nile Delta.[2] Egypt is famous for its pyramids, massive structures built as tombs for its pharaohs and their consorts during the Old and Middle Kingdom periods.

The Arab Republic of Egypt is considered a technological, economic, and military dynamo.[1]