The United Republic of North America (abbreviated URNA[1]) is a loose association between the nations of Canada, Mexico, and the "political remnants" of the former United States of America. It is located on the continent of North America on the human homeworld of Earth.[2]

The desert city of New Phoenix.

The URNA features deserts and tundra. It is as well verdant.[2] The URNA has a west coast[3] and an east coast.[4] One of the aforementioned deserts appears to be near the west coast while snow appears in the northern areas.[5]

At some point before 2524,[7] the United States of America had ceased to exist as an independent nation, leaving "political remnants" and former states.[2] Despite this, citizens in the former country still identified as "American".[8] By the 26th-century, Washington state had ceased to exist as a political entity.[9] However, Kentucky had been absorbed into the URNA.[2] Around the early 2540s, New Phoenix was the fourth most populated city, behind Chicago in third, Los Angeles in second, and New York City in first.[10] 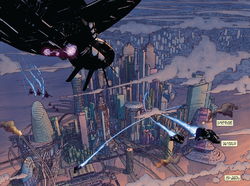 Cleveland, Ohio during the Battle of Cleveland.

Durga: "It's a Covenant capital ship. Those little sparkles of light are Seraph fighters."
Kamal Zaman: "They're here."
— Durga explaining to Kamal and his family what they are seeing outside of their home in the first attack on URNA soil in Berkeley.[11]
Main articles: Battle of Cleveland, URNA Southwest Campaign

Several engagements of the Human-Covenant War took place in the URNA in the climactic year of 2552. One of the earliest engagements in what would become the Battle for Earth took place in October in the Berkeley area, a city on the west coast of the URNA.[11][Note 1] Either due to this specific attack or the attack on Mombasa around the same time, air raid sirens were activated on the east coast.[12][13]

Later in November, the Battle of Cleveland, was fought in North America; during which many citizens of the metropolitan city attempted to flee north in boats from the invading Covenant forces to Canada. While the city suffered minimal damage from hostile and friendly fire, many citizens were killed by the genocidal Covenant. The UNSC established a relief camp in the nearby city of Akron.[14]

In the final stages of the Battle for Earth, Covenant forces retreated to North America while the Prophet of Truth fled to Installation 00, with at least one Jiralhanae expedition deploying to Arizona to locate and activate a Forerunner artifact. This effort was foiled by elements of the UNSC Home Fleet.

In July 24, 2557, the city of New Phoenix was attacked by the Forerunner known as the Didact. Using a device called the Composer, the Didact extracted the mental patterns of over 7 million people.[10] MCPO John-117 stopped him using a HAVOK nuke, destroying the Composer and the Didact's flagship,[5] although some of the consciousnesses of the composed New Phoenix residents were transferred back to Requiem and converted into new Promethean Knights.[15]

The URNA is home to the UNSC's Supreme Headquarters and is home to numerous facilities and military bases. This is mostly due to its historic association to the United Nations.[2] The Office of Naval Intelligence also maintained a branch headquarters in Boston.[16]

URNA territory is playable on the map Foundation.