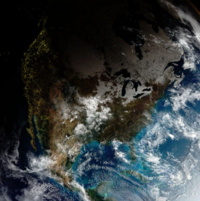 North America as seen from orbit.

North America is a continent in Earth's northern and western hemispheres. It is bordered on the north by the Arctic Ocean, on the east by the northern Atlantic Ocean, on the southeast by the Caribbean Sea, and on the south and west by the northern Pacific Ocean. South America, another continent, lies to the southeast. North America covers an area of about 24,709,000 square kilometers (9,540,000 sq mi), about 4.8% of the planet's surface or about 16.5% of its land area. It is the third-largest continent on the planet, following Asia and Africa. North America and South America are collectively known as the Americas. North America is home to the Great Lakes, the largest group of freshwater lakes on Earth.

North America was reached by its first human populations during the last glacial period, via crossings of the Bering land bridge between it and Asia. These migrants settled in many locations on the continent, from the Inuit of the far north to the Mayans and Aztecs of the south. These isolated communities each developed their own unique ways of life and cultures, and their interaction with one another was limited in comparison to the extensive trade and conflict of civilizations across the Atlantic in Europe and Asia. As the Age of Exploration dawned in Europe, Europeans began to arrive in the Americas and develop colonial ambitions for both North and South America. Christopher Columbus was credited with "discovering" the New World for Europeans, although at least the Norse are known to have explored it almost 500 years previously, and influxes of Europeans soon followed and overwhelmed the native population. North America became a staging ground for ongoing European rivalries. The continent was divided by three prominent European powers: Great Britain, France, and Spain. Conflict over resources on North America ensued in various wars between these powers, but, gradually, the new European colonies developed desires for independence.

Revolutions, such as the American Revolution and Mexican War of Independence, created new, independent states that came to dominate North America. From the time of independence of the United States, that country expanded rapidly to the west, acquiring the massive Louisiana territory in 1803. In 1845 Texas joined the United States, which would later lead to the Mexican–American War in 1846 that began American imperialism. As a result of conflict with Mexico, the United States made further territorial gains in California and the Southwest. In 1941, the entry of the United States into World War II helped to tip the balance in favor of the allies, of which Canada and Mexico both also were a part. The destruction of Europe wrought by the war vaulted all North American countries to more important roles in world affairs. The United States especially emerged as one of the first true superpowers. Multiple North American nations were founders of the United Nations in 1945, and its headquarters was established in New York City.

Sometime after the dawn of the 21st century, a second civil war tore the United States of America asunder. Eventually, the United Republic of North America (URNA) was born from the coalescing of Canada, Mexico, and the political remnants of the United States of America. However, even in the 26th century, it is still common for people living in the URNA to refer to themselves as Canadian, Mexican, or American, as well as to use the names of the former nations in reference to the geographic areas they formerly occupied. The United Nations has continued to be headquartered in New York City ever since its founding, even with the major expansion of its role in planetary governance. In 2075, the UN created the Unified Earth Government, which would go on to become the official governing body overseeing Earth and her colonies in 2170, following the Interplanetary War. Prior to this, the United Nations Space Command was created in 2163 and its supreme headquarters was established in the URNA. Over time, Los Angeles became the most populated city on the continent after New York City. In the 24th century, the Centennial Orbital Elevator was constructed in Havana, Cuba.

When the war with the Covenant began, the UNSC Supreme Headquarters in New York City suddenly became much more important that the UEG Primary Headquarters in Sydney, Australia, though HIGHCOM Facility Bravo-6 arguably played a great role in the war effort directly. For a time, the UNSC, headquartered in North America, took over governance of Earth and her colonies in the face of potential human extinction. On October 20th, 2552, the Prophet of Regret and the Fleet of Sacred Consecration arrived at Earth, signaling the start of the Battle of Earth. Regret's fleet was preoccupied with uncovering the portal to the Ark, and thus focused all attention on eastern Africa. However, when a new fleet under orders from the Prophet of Truth arrived almost immediately afterward, the fighting spread across the globe. Some Covenant forces were dispatched to the Yucatan Peninsula, where they began conducting extensive underwater excavations in search of Forerunner artifacts. Spartan-II Blue Team put an end to these excavations, and then on November 3rd, deployed to Havana, which had been taken over by Covenant forces. Blue Team's primary objective was to retake the Centennial Orbital Elevator, but it was destroyed after the plan changed so that low-yield FENRIS nuclear warheads were used to destroy a CPV-class heavy destroyer. The Covenant also invaded the city of Cleveland Ohio, looking for an artifact known as the "Key of Osanalan". The Key turned out to be a hoax perpetrated by Colonel James Ackerson, who, while being tortured for information, fabricated the story of the key in order to keep Cleveland from being glassed due to his brother's residence there. While Cleveland suffered catastrophic damage from the urban fighting that resulted, the occupation was ultimately repelled, largely thanks to Ruwan's self-sacrifice, whereby he became a living targeting vector to be taken aboard the Harbinger of Piety. [1] Many refugees left the city for a relief camp set up in Akron. Upon the Prophet of Truth's retreat from Earth through the Portal at Voi leading to Installation 00, the Covenant forces that remained focused their efforts on North America; Fleet Admiral initiated Operation: MARSH FLASH to eliminate the Covenant presence on Earth. During this effort, surviving Jiralhanae forces attempted to capture and activate Forerunner artifacts unearthed in Arizona. The UNSC successfully thwarted this effort.

New Phoenix is hit with the full brunt of the Composer.

Following the cessation of war with the Covenant, governing power was returned, at least nominally, to the Unified Earth Government and the United Nations, the headquarters of both which managed to survive the assault on Earth. Almost five years after the Covenant was beaten, on July 24th, 2557, the Ur-Didact arrived suddenly at Earth aboard the Mantle's Approach. Having recently acquired a Composer, he targeted city of New Phoenix for the composition of its citizens. The entire population of the city, numbering around seven million people, was successfully converted to digital essences, many of which were sent through slipspace to the Composer's Forge to begin the process of creating new Promethean Knights. The Master Chief succeeded in destroying the composer and halting the Didact's attack. Not long after, Jul 'Mdama's Covenant opened multiple portals from Installation 03. One such portal opened in New Phoenix, thanks to a Forerunner artifact that was being studied there. Both Covenant and Promethean forces poured through the portal, and battle was joined with UNSC Marines. A lone Spartan headhunter, with the help of an ONI research team, was successfully able to close the portal using the Conduit. After hostilities ceased, the city was quarantined. Officially, the story was that the attack was purely Covenant in origin, but six months later, this position was revised. After eight months of quarantine, President Ruth Charet presided over a rebirth ceremony for the city. On October 28, 2558, a Guardian arrived at Earth under the direction of Cortana and swiftly proceeded to knock out all communications and power across the planet with an enormous electromagnetic pulse. North America was not spared and fell under her sway along with every other continent on the planet, not to mention those on many other human colonies as well.