Were you looking for James Ackerson's brother Ruwan, or for another James?

"I do get the feeling that Ackerson would gladly assign members of his own family to a suicide mission if he could find an appropriately high value target to send them against."
— Kurt Ambrose in a communique to CPO Franklin Mendez.[2]

James Ackerson was a colonel in the UNSC Army employed by the Office of Naval Intelligence during the Human-Covenant War. Known for his ruthless and ambitious persona, he was the mastermind of the SPARTAN-III program and the most formidable rival of Dr. Catherine Halsey. His Career Service Vitae was impressive, as he had survived at least three battles against the Covenant. Early in the war, he received a promotion and volunteered for a dozen black operations. Ackerson was employed by ONI as a liaison officer, likely maintaining the relationship between ONI and the Army.[3]

As children, Ackerson and his brother Ruwan were avid fans of classic fantasy literature, particularly the works of J. R. R. Tolkien. They often imagined that they were fighting a dragon. Together, they created the imaginary Key of Osanalan, which they pretended to quest for when fighting the dragon.[4]

During his time at boot camp, Ackerson trained on Cyrus VII alongside Twyker. Twyker would later maintain that Ackerson owed him money.[5]

Vice Admiral Parangosky: "You want to trade lives for time..."
Colonel Ackerson: "Yes, ma'am. Isn't that the job of a soldier?"
— Conversation between Ackerson and Parangosky about the SPARTAN-III program

Shortly after Dr. Catherine Halsey's SPARTAN-II program went active, Ackerson began to plan on a supersoldier project of his own, dubbed the SPARTAN-III program. He conducted extensive research on Halsey's work with the SPARTAN-II program, obtaining the DNA profiles of the candidates and covertly observing the flash clones used to replace the SPARTAN-II children; he even had the clones' bodies retrieved and autopsies performed on them after they died of congenital diseases.[6] However, he would abandon the use of flash clone replacements in his own program, citing the dubious ethics of flash-cloning as one of the failures of Halsey's program when presenting his own project to ONI.[7]

In 2531, Ackerson proposed the SPARTAN-III program to the Office of Naval Intelligence senior brass, including Captain Aaron Gibson, Rear Admiral Ned Rich, and Vice Admiral Margaret O. Parangosky in a meeting aboard UNSC Point of No Return. They approved the program and Ackerson went from serving as a field officer to working a desk job. At first he was upset by this, but grew to prefer it as opposed to his dangerous but more exciting job as a field officer.[8] Ackerson chose SPARTAN Kurt-051 to serve as the commanding officer of the SPARTAN-IIIs, providing him with an officer rank as well as a new identity.

After the destruction of SPARTAN-III Beta Company, Ackerson attempted to have Tom-B292 reassigned under his personal command. Kurt had to appeal to Admiral Parangosky to have Tom reassigned to Camp Currahee to train Gamma Company along with his fellow survivor Lucy-B091.[9] 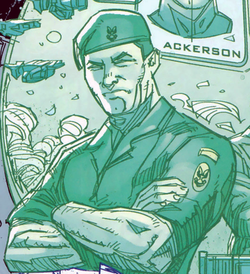 An archive photo of a younger Ackerson.

With the concurrent project underway, Ackerson focused all of his efforts on political maneuvers rather than battlefield tactics, eventually granting him a seat on the UNSC Security Council and the Special Weapons Development program within UNSC High Command. He headed several high-profile projects within the Office of Naval Intelligence. Among many other programs, he was evidently involved in the development of the HRUNTING/YGGDRASIL exoskeleton series.[10] Because his projects often competed with Dr. Catherine Halsey's projects for funds, he had a long-standing rivalry with Halsey and her SPARTAN-IIs. He had a private AI construct named Araqiel, whom he tasked with spying on Dr. Halsey and her confidential SPARTAN-II project.[11]

On August 29, 2552, during a field test involving the pairing of John-117's Mark V MJOLNIR armor with Cortana, Ackerson tried to kill the Spartan: he authorized the use of Lotus anti-tank mines, a squad of Orbital Drop Shock Troopers, three 30mm chain guns, and even an air strike by a SkyHawk fighter against the Spartan. Ackerson's intent was to either disgrace the SPARTAN-IIs and Dr. Halsey, and, if possible, to kill the most well-known Spartan alive. Nevertheless, John succeeded and Cortana sought revenge by wreaking havoc in Ackerson's private files; she hacked into Ackerson's personal computer and sent a note requesting reassignment to front line service, as well as sending a large amount of money from his account to a brothel on Gilgamesh and then sending the bill to his home, where his wife would find it.[12] However, he managed to exonerate himself.

During the Fall of Reach on August 30, 2552, Dr. Halsey accessed Ackerson's computer in ONI CASTLE Base, where she found extensive records of the SPARTAN-IIs in a folder called "S-III". Another file, labeled "CPOMZ", contained star charts. This suggested to Halsey that Chief Petty Officer Franklin Mendez was involved in a new SPARTAN project with Ackerson. The S-III file contained a folder titled "KING UNDER THE MOUNTAIN". It contained records of CASTLE Base and a complete survey of Menachite Mountain, into which CASTLE Base had been built. Halsey later used this information to locate the SPARTAN-IIIs on Onyx. Halsey had actually already been made aware of the existence of a new SPARTAN program by reading classified files with the help of the AI Kalmiya almost a year prior. She had also met NOBLE Team, which, with the exception of Jorge-052, was comprised of SPARTANs whom were not part of her program. However, until finding the S-III file, she was not aware of the SPARTAN-III program specifically.[13]

In September 2552, Ackerson was scheduled to operate on a frontline post due to Cortana's forged reassignment request. However, likely through underhanded maneuvering, he did not follow the assignment and remained one of the members of the UNSC Security Council.[14] While on the Council, Ackerson granted approval to Damien Hogarth of ONI to conduct full psyche evaluations on the returning Spartan-IIs from Operation: FIRST STRIKE in order to ensure the stability of the program.[15] 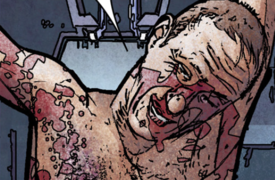 Colonel Ackerson during his torture by the Brutes during the Battle of Earth in 2552.

By the time of the Covenant invasion of Sol, Ackerson had apparently left his post in the UNSC Security Council and had been assigned to Mars, where he continued working as a combat officer. During the Battle of Mare Erythraeum in November 2552, his forces fought valiantly against the Covenant but were eventually routed and defeated. He was captured during the battle and was interrogated by Lepidus, the Jiralhanae Shipmaster of the battlecruiser Triumphant Declaration in the Fleet of Furious Redemption.

During this interrogation, Ackerson told Lepidus of the Key of Osanalan, claiming that it was a Forerunner object located somewhere in Cleveland, Ohio. He told them this to ensure his brother's survival: The Covenant would invade Cleveland but would not destroy it, and Ruwan's knowledge of the Key of Osanalan would help him and others escape the city. Additionally, it would stall the Covenant's activities on Earth.[16]

Before he was confirmed dead, Admiral Parangosky was planning to assign Ackerson to direct the SPARTAN-IV program and make Dr. Halsey work for him.[18] His name was put on the Voi Memorial in March 2553. Out of both sincerity and spite, Admiral Parangosky later noted to Halsey that Ackerson had died a hero.[19]

Ackerson was cunning but shortsighted and often mixed personal glory with more humanitarian goals. For example, his creation of the SPARTAN-III program was an effort to "trade lives for time", but it was also an attempt to out-do his rival, Catherine Halsey. He was rather savage at times, eager to put his own petty revenge before the betterment of humankind. During a field test of the Mark V MJOLNIR armor with Cortana and John-117, Ackerson exceeded the testing parameters, nearly causing the deaths of the SPARTAN and the AI through use of automated turrets, ODST squads, anti-tank mines, and even an airstrike.

He was arrogant and condescending to most other people in ONI, even top-ranking brass such as Major General Nicolas Strauss. He frequently belittled and mocked Dr. Halsey and the SPARTAN-IIs and was very open with his views on them even in formal meetings. Ackerson openly ridiculed even John-117 during the Spartan's debriefing concerning the Battle of Sigma Octanus IV in Camp Hathcock.[20] This attitude ultimately provoked the ire of Fleet Admiral Hood, who harshly rebuked him for his disparaging remarks about Halsey and her Spartans during the Security Council's debriefing of Lieutenant Wagner.[21][Note 2]

However, Ackerson was not completely unsympathetic. When he was captured by the Covenant, he created a story to mislead the Covenant in an attempt to save his brother's life, which led to the Covenant capturing Cleveland instead of outright destroying it. Ackerson appeared to have been close with his brother as children and continued that care as an adult despite his overall demeanor which would suggest a lack of care.

After her capture on High Charity in November 2552, Cortana regretted her failure to have Ackerson killed, after the Gravemind repeatedly mentioned him.[22]