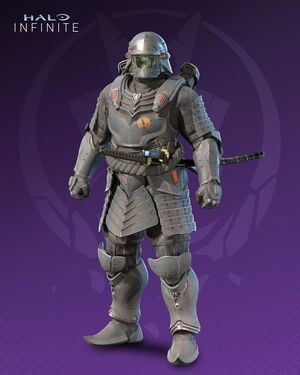 The Yoroi is an armor core employed by samurai of the 343 clans of the Imperial Court in the Tenrai Fracture.[2][1]

The Yoroi armor core was originally unlockable by attaining level 5 on the Event Pass during the Fractures: Tenrai event in Season 01: Heroes of Reach, the first season of Halo Infinite multiplayer. Customization options for the Yoroi are unlocked by attaining later levels of the Event Pass or purchasing Shop Bundles from the Halo Infinite in-game shop during the weeks when the Fracture: Tenrai event is live.[2][3] With the release of the December update during Halo Infinite's Winter Update, the Yoroi armor core was granted to all players for free.[4]