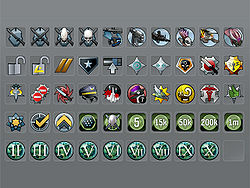 There are a total of forty-nine achievements that were shipped with the game totaling 1,000 gamerscore in Halo: Reach: twenty-three Campaign, seven Firefight, four Multiplayer, six Training, and nine Player Experience achievements.

Following the shutdown of Xbox 360 Halo online services on January 13, 2022, the online achievements are no longer attainable.[1][2]