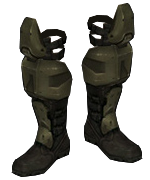 A pair of VZG7 boots. 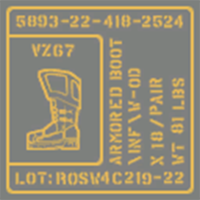 The VZG7 armored boots are standard issue combat boots for UNSC Marines, worn as a part of the Marine BDU. The boot is protective, lightweight, nearly liquid-proof, and is generally comfortable.[1] The VZG7 boots have been in use for most of the Human-Covenant War.

In the later version, the metallic armor covering the upper shin appears to be separate from the boot, and does not cover the back of the leg. Armored coverings attached by straps are often worn on the boot for greater protection.[3]

Other varieties of UNSC combat boots often contain more protective armor plating than the standard VZG7 boot. The boots used by Marines stationed on the UNSC Spirit of Fire in 2531 were fully armored, with protective plating covering the whole boot and the shin, while the boots sported by the Marines aboard the UNSC Pillar of Autumn in 2552 included armor that covered the shin.

Another name for these boots is "Boondockers".[1]