Old Mombasa was the older, more run-down sector in Mombasa, Kenya on Earth. All municipalities within a 74-kilometer radius of the island-city of New Mombasa were unofficially referred to as Old Mombasa.[1]

The seawalls of Old Mombasa.

At some point prior to 2552, large sea walls were constructed along the beaches of Old Mombasa.[2]

In the dawn of the 24th century, Mombasa was chosen to be Earth's first tether city. Consequently, the island-city transformed into the hi-tech metropolis of New Mombasa, while large portions of its old population migrated to the mainland towns. By 2430, most of the surrounding towns had effectively become part of the Mombasa urban area, collectively referred to as "Old Mombasa". The switch was never official and many of the neighborhoods within direct line of sight to the Mombasa Tether still distribute newspapers and chatter directories under their "old" names.[1]

Prior to the Covenant attack, a group of Spartan 1.1s led by Kevin Morales had hidden away guns on a rooftop in Old Mombasa.[3] 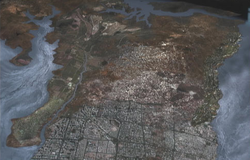 A portion of Old Mombasa north of Mombasa Island.

On October 20, 2552, the Covenant invaded Earth. During the orbital battle, the Prophet of Regret's flagship, Solemn Penance, slipped past Earth's defense grid and descended near the surface, and started deploying troops in both New and Old Mombasa. During the battle, three Pelican dropships, one with SPARTAN-117 on board, were deployed to the city with the mission to capture the Prophet of Regret. On their way to New Mombasa, all of the Pelicans were shot down by a Covenant Scarab, and crash-landed in Old Mombasa Sector 0-5. Throughout the rest of the mission, the Chief, accompanied by Sergeant Johnson and a number of UNSC Marines, fought their way through the slums of the old city, to the Hotel Zanzibar, out onto the beaches, and finally to the underground highway system that connects the city to New Mombasa.[2]

When Regret's carrier jumped into slipspace above the city, the jump created a large crater in Old Mombasa, north of the Mombasa island.[4] The Slipspace rift also sucked several city blocks through, and some of the buildings ended up in outer space near Installation 05.[5] After the battle, large portions of Old Mombasa were glassed by the Covenant fleet in order to unearth the Forerunner portal artifact the city was built upon.[6]

At some point during or after the battle, Aircraft carriers were sent to the Mombasa Quays with F-99 Wombats and Pelicans.[7]

Old Mombasa surrounds Mombasa Island, which housed the metropolis of New Mombasa. The island is located between two ocean inlets, Tudor Creek to the north and Kilindini Harbor to the south. Old Mombasa was located across these bodies of water on both sides of the island.

Some areas of Old Mombasa had connection to the Superintendent.[8]

The New Mombasa Police Department also had at least one station in Old Mombasa.[8]

Garbage in the area was handles by New Mombasa Waste Management.[2]

The residents of Old Mombasa even spoke their own dialect, indicating their isolation.[10]

The streets of Old Mombasa, showcasing the characteristic, low-level architecture of the historic districts.

While it is not accessible in Halo 3: ODST, Old Mombasa can be seen in the background during some campaign levels. The bridge connecting Old Mombasa to New Mombasa in Halo 2 is conspicuously absent from the later game. This is because ODST is set on the other side of the city; to save in-game resources the northwestern side of Mombasa has no modeled geometry.