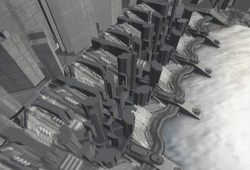 Kikowani was a district of the city of New Mombasa, Kenya, Earth. It was located on the northeastern side of the city, next to the large seawall surrounding the Mombasa island. Just beside Kikowani to the southeast were the city center and Tanaga.[1]

During the Covenant attack on the city in the Battle of Earth, the area was flooded. Numerous Huragok Recharge Stations were deployed to the area by the Covenant.[1]

A battle also took place here, between a squad of ODSTs, and a large number of Covenant forces, including a Scarab. During the battle, the ODSTs destroyed multiple Huragok Recharge Stations, as well as most of the Covenant forces present in the area, before flying out of the city through a tunnel in a stolen Phantom dropship.[1]