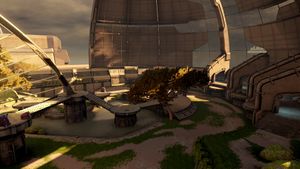 Kilindini Park Cultural Center[1] is a park in New Mombasa, Kenya, Earth. Shimanzi Road connects it and the Mwatate Street Transit Center to Beria Plaza.[1] The park is composed of two circular sections, both of which are partially underneath a large amphitheater dome.[2] Kilindini Park was most likely under the jurisdiction of New Mombasa Parks and Recreation, much like the Uplift Nature Reserve.

During the Battle of Mombasa, UNSC Army personnel were tasked with evacuating citizens here.[1] Covenant forces soon staged an attack on the park, killing almost all human forces present. The Covenant set up multiple plasma cannons in one section of the park, augmented by a large number of Kig-Yar Snipers, a pair of Ghosts and other infantry. A Wraith, more Ghosts and Kig-Yar Snipers occupied the other section. By the time John-117 and a squad of Marines lead by Corporal Palmer entered the park via the neighbouring sewage tunnels, Sergeant Marcus Stacker was the only surviving human in the area. The Marine was driving a Gauss Warthog around the area, under fire from plasma cannons and strafed by Ghosts. The Spartan arrived just in time to see the Scarab walker he had been pursuing from Kilindini Bridge pass through the area. With the help of the Spartan, UNSC forces were able to clear the Covenant-occupied park allowing them to push on to Sector B.[2]