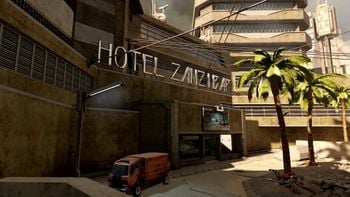 Hotel Zanzibar was a civilian hotel in Sector 0-5 of Old Mombasa on Earth.[2]

On October 20, 2552, during the Battle for Earth, Hotel Zanzibar was abandoned, along with the rest of the city. When the UNSC In Amber Clad dispatched Pelicans full of relief troops for the massive battle going on inside the city, two of those Pelicans were shot down by a Scarab near the hotel. The Marines who survived the crash set up a command post inside the hotel lobby. They were surrounded and almost overwhelmed by Covenant ground forces when John-117 arrived and aided the surviving Marines, eventually leading them into New Mombasa.[2][3]

The lobby is located on the Liberty Street side of the building. From the lobby is a little foyer, which contains four elevators. This foyer then leads down a hall, which contains 16 rooms. This hall leads to the beachside of the building. An outdoor pedestrian bridge crosses over a waterfront road way to a small viewing area that looks over the New Mombasa industrial zone.[2] As well, somewhere within the hotel is the Zanzibar and Grille.[1]

The hotel bears a slight resemblance to the Guggenheim Museum in New York City, New York.