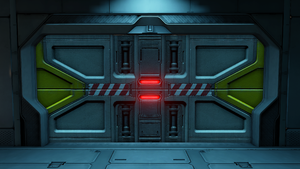 A set of blast doors on the Orbital Defense Platform Cairo Station.

A blast door is a type of heavy door designed to withstand large amounts of damage, especially by explosives, or to seal pressurized compartments on a starship in case of a hull breach.

Blast doors are an important safety measure for many starships or space stations. Blast doors are similar to airlocks in that they are used to seal off areas suffering, or have a strong possibility of suffering a breach and loss of atmosphere. They are distinguished by their interlocking sections that rise from the floor, and drop from the ceiling. The UNSC Pillar of Autumn's blast doors had large panels of what seem to be high-strength plexi-glass, since it can resist blasts of plasma from the handheld Okarda'phaa-pattern plasma rifle.[1]

On the Pillar of Autumn, the blast doors were also used to trap Covenant boarding parties. This is an efficient way of cutting off boarding parties, as the doors are built to be extremely resilient to damage.[1]

Blast doors are also commonly used in blast shelters, military bases or other locations where heavy, secure doors are necessary. The city of New Mombasa had heavy blast doors in its tunnel systems and separating its city compartments, to seal off select areas in case of an emergency.[2]

The Forerunners also constructed heavy blast doors within their most significant facilities, including the Control Rooms and the tunnel systems in their vicinity on the Halo installations.[3]