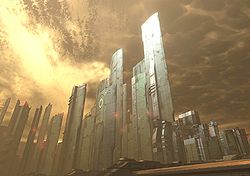 The city center during the Battle of Mombasa. The Tanaga district and the NMPD headquarters can be seen to the right.

The city center of New Mombasa was a part of Mombasa Island. Portions of the city center were walled into multiple sections.[Note 1]

The city center housed numerous massive skyscrapers, which easily dwarfed the buildings in the rest of the city. Many of the highest skyscrapers in the city center had 300 stories,[1] with the tallest being the Vyrant Telecom tower in the very center, reaching two kilometers in height.[2]

On October 20, 2552, the High Prophet of Regret's Assault Carrier came to rest over the city center.[3] Specifically at the Uplift Nature Reserve.[4] Over the course of the battle, Stephen broadcasted messages from the NMPD headquarters in the city center.[5]

After around one hour[6] of battle, Regret's carrier initiated a Slipspace jump in the city.[7] Immediately after the slipspace event, the city center was occupied by the Jiralhanae-led remaining forces of Regret's Fleet of Sacred Consecration,[8][9] and was eventually glassed by an excavation fleet on the next day.[10][11]

The Tanaga district, which sat in the middle of the island, housed most of the city's skyscrapers.[12] Further to the southeast sat several numbered districts.[13] Sector 10, the southeast most point of the island,[13] housed a security zone for the ONI Alpha Site.[14][15]

At the base of the Vyrant Telecom tower was the NMPD headquarters.[12]

Much of the city center itself was part of a large, arcology-like building complex which elevated it above the surrounding terrain. This superstructure was bordered by walls which sloped down to ground level. The Tanaga district, which was home to smaller buildings, was also located within this structure.

All of the buildings in the area, including the walled complex on which the skyscrapers stood, followed a standardized, modular design aesthetic. Using metal and blue-green glass as the primary facade materials, most of the buildings were characterized by a flat shape, and were oriented similarly, with their razor-thin sides pointed southwest toward the Indian Ocean. The buildings were also arranged in a way that their height increased evenly on both sides toward the Vyrant tower in the center, giving New Mombasa a distinctive skyline.