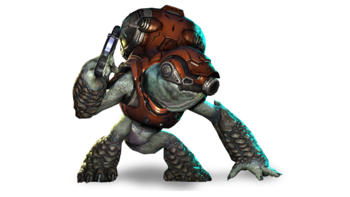 Imperial is a specialist combat role for Unggoy combatants serving in the Covenant and its remnant factions, prominently Jul 'Mdama's Covenant and Vata 'Gajat's mercenary group.[1][2]

The harness used by Imperials was also issued to some troops during the Human-Covenant War,[4] and is more resilient than the Storm version. The helmet is a heavy armor faceplate which protects the whole face. The methane tank resembles a Balahoan octopoda.[3] A similar configuration of harness was issued by Banished Unggoy Assaults, albeit more comparable to a more resilient version of the normal standard combat harness similar to those used during the Human-Covenant War, which was as well as used by Banished Unggoy Conscripts.[5]

The Imperial harnesses have been seen in orange, red, green, blue, and silver, implying Imperial-class Unggoys may have their own internal ranking structure.[6]

Imperials in Mdama's Covenant are veterans of the Human-Covenant War, having served under the Covenant military in the hegemony's prime. As befits of their history of service, they are given slightly higher rank privileges and more durable armor from their Sangheili superiors.[2] As Jul's Covenant faction gained permanence, it is not known if Imperials will keep their status or will be assimilated into the larger Unggoy population.[3]