The Battle of Alpha Corvi II was one of the earliest conflicts of the decades-long Human-Covenant War, fought between the Covenant and the combined forces of the United Nations Space Command and local insurrectionists on Alpha Corvi II.[1]

Whitaker: "They just came down and started killing people. Everybody."
John-117: "That's what they do. And that's what we're here to stop."
— A leader of a URF militia describes the attack and John responds in confidence.[1] 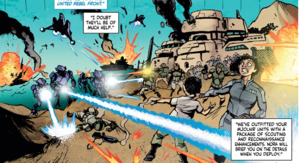 The Covenant forces that attacked Black Reef killed everyone in sight indiscriminately.[1]

On December 3, 2525, a substantial Covenant force emerged from slipspace near Alpha Corvi and proceeded to move toward the system's second planet.[1] UNSC ships in orbit mounted a defense but a number of Covenant dropships managed to land troops on the surface. At just three hours after first arriving in the system, Alpha Corvi II's largest city, Jamshid, was under assault by the main contingent of ground-based hostiles. Marines were holding their own there but enemy reinforcements were anticipated.[1]

It was at this point that the four young Spartan-II warriors picked to comprise Blue Team were briefed on the attack.[1] They were en route to the system aboard the Halcyon-class light cruiser, UNSC Persian Gate. Lieutenant Commander Yao informed the Spartans that they would be dropping on the outskirts of Jamshid and engaging the Covenant from the rear. Their objective was to lessen the pressure on the main UNSC garrison within the city so that a proper counterattack could be prepared. It was also imperative, they were told, that they operate independently of Ground Command and refrain from having any contact with anyone from the Marine Corps whatsoever.[1] The Persian Gate arrived at the besieged planet around thirty minutes following the Spartans' briefing and was met with urgent messages from officers on the ground. A separate group had detached itself from the main Covenant force and had landed troops near the island mining settlement, Black Reef. There was no UNSC presence there, but the town was being defended by local insurrectionist militias affiliated with the United Rebel Front. In light of this new information, Blue Team was redirected to Black Reef and ordered to neutralize the invaders there and discover why it was being targeted. During their insertion via a D77-TC Pelican, Nora, an A.I. on the Persian Gate, introduced the Spartans to various scouting and reconnaissance enhancements their armor was outfitted with for this mission, including prototype active camouflage technology.[1]

Miguel: "This ain't our fight, Whit. Why should we help them after what they did to Watts?"
Whitaker: "You heard what he said about Harvest, Miguel? That's why."
— Whitaker shuts down any thoughts of going back on their new undesirable but necessary alliance with the Spartans.[1] 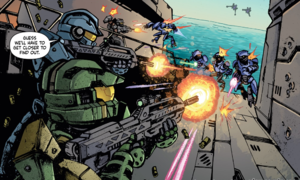 By working with the URF, Blue Team was able to steer the Covenant troops right into its line of fire.[1]

Blue Team was set down in a ground vehicle on the beach and immediately began taking fire from rebels encamped a short distance away.[1] Kelly-087 and Frederic-104 recommended taking them out quickly so they could move on to deal with the Covenant, but John-117 opted for a different option. He activated his active camouflage and crept up on the small band, only revealing himself when he could reach out and touch their apparent leader. John identified his team as being responsible for capturing Colonel Robert Watts and argued there was no way they could hope to beat them. He told them what had happened to Harvest and through appealing to their immediate common enemy, was able to get the leader, Whitaker, to agree to work together for the time being. At John's insistence, he ordered his squad to circle around and rendezvous with the rest of their forces at the edge of a lagoon. From there, they would hit the Covenant from one side and drive them toward where Blue Team lay in wait. In order to keep an eye on their uneasy allies, John sent along a surveillance drone to keep a visual on them. The insurrectionists took up position as planned and opened fire, catching the small contingent of aliens by surprise and sending them running. Blue Team too unloaded on them with BR55 battle rifles when the distance between them closed. During the fighting, John's drone was destroyed by a shot from a Kig-Yar's Type-25 plasma pistol. The Sangheili and Kig-Yar that remained escaped into the mouth of a tunnel that led deep into the mines beneath the reef's bedrock. John was determined to pursue them, not least of which because he was curious about a strange device a Sangheili took in with him. Whitaker informed him that though the mine was an expansive mess of tunnels, it only had the one entry and exit, meaning the enemy was trapped within it.[1] 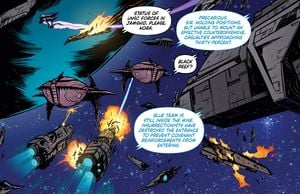 The UNSC fleet quickly lost its initiative in the battle above Alpha Corvi II as the Covenant's superior firepower ripped through their defensive lines.

The sudden new arrival of Covenant reinforcements in orbit prompted LDCR Yao to have Nora contact Blue Team.[1] Yao let them know that a host of new dropships were inbound. Most of them were heading for Jamshid, but three Spirits would reach Black Reef in just three minutes. The naval battle over the planet looked to now be going very badly for the UNSC. Without any hesitation, Whitaker volunteered to hold the mine entrance with his people so the Spartans could pursue the others that had vanished within. Some militia started to question their leader's willingness to help the titanium-clad warriors, but Whitaker had only to remind them what John had said about Harvest. Soon, the Spirits were unloading Sangheili on the island who were met with a hail of bullets from the URF rebels.[1] At some point after this, a plan enacted by the rebels triggered a cave-in that trapped Blue Team and its prey in the mine.[4] Despite this, the alliance with the URF held and both groups continued to fight the Covenant together, now with the goal of also keeping a Forerunner artifact buried deep underground out of its hands.[3] 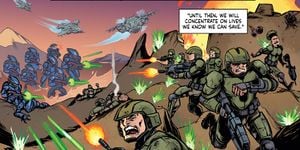 With their planetary defense failing, the UNSC was forced to abandon Jamshid and deployed dropships to evacuate the surviving Marines, leaving URF forces behind.

While the UNSC evacuation of its personnel from the planet commenced, the URF continued to fight off fresh waves of Covenant reinforcements on Black Reef. Outnumbered, Whitaker ordered several soldiers to relocate to Bondi Beach to acquire a "tactical necessity". While the URF retreated from its position at the mining facility above, Blue Team fought through the flooding corridors of the mine shaft, separated from Linda-058. Linda, engaged by an estimated hundred hostiles equipped her Jetpack to dodge enemy fire while continuing to kill infantry as she sought a path back to her team. Her teammates were confronted by a Sangheili Zealot armed with an Energy Sword, who after several near misses was finally killed once his shields had been brought down by the Spartans' concentrated fire. Utilizing a surveillance drone, Kelly-087 gained visual on Linda on the other side of a rock wall three meters thick. Combining a pack of MX-8 plastic explosives and a plasma grenade, John blasted a path through to Linda and the four Spartans resumed their attack on the remaining Covenant. During the firefight, the team's drone was destroyed by enemy fire, costing them the intel gathered on the Covenant's primary target. Frederic-104's armor had also been critically damaged in the battle. After wiping out the remaining infantry, the Spartans found the cavern to be rapidly filling with water and held their position until it was deep enough to swim upwards towards the surface. Despite Fred's armor having been pierced with his suit rapidly filling with water, he and his fellow Spartans were able to reach open waters and swim back to the surface.[citation needed]

With the majority of their forces in the process of being evacuated, Commander Yao deployed Pelican dropship Tango 807 to rescue the Spartans. The Pelican arrived at Bondi Beach to find it swarming with Covenant. Yao ordered the Pelican to abort its landing until the Spartans' status could be verified. Minutes later, Blue Team resurfaced and linked up with Whitaker, who had commandeered an APC and proceeded to mow down the Covenant forces waiting to intercept the Spartans. Together, the two sides launched an assault on the extraction zone, allowing Tango 807 to land. Whitaker and his men followed for evac, but were denied entry by the Pelican's lieutenant who had been ordered by Yao not to accept any non-UNSC personnel. Whitaker argued against this, but was flatly denied and told that he would have to find his own means off the planet, and that no human ship rebel or otherwise would be shot down should they succeed. Tango 807 then departed into space, and the lieutenant was interrogated by John who was furious at the abandonment of their allies on the ground. Whitaker radioed for evac but was far out of range of any help that could've come, and was forced to face the Covenant alone. The rebels were wiped out and Whitaker was himself slain by an Elite, signaling the fall of Black Reef and the rebel garrison there.[citation needed]

The Blue Team returned to Persian Gate for a debriefing on their discovery in the cave system. The Persian Gate then fled into slipspace as the battle above Alpha Corvi II continued to rage. In the hours that followed, all remaining human resistance on the surface was routed, and the few UNSC ships that remained in orbit continued to attack the Covenant fleet even as their fighter screen had been completely decimated. All remaining human vessels were either destroyed or forced to retreat, and Alpha Corvi II was declared lost shortly thereafter.[citation needed]

The colony was lost and presumably glassed by the Covenant after the UNSC's defeat. The humans sustained huge losses on both fronts despite having inflicted enormous casualties against the Covenant on the planet's surface, losses that at the time were merely considered "collateral damage" and acceptable in the face of the larger threat posed by the alien hegemony. The battle came at the cost of most, if not all the rebel forces who had aligned themselves with the Spartans in their mission to stop the Covenant, a decision that greatly angered John who had honored his alliance with the rebels. Alpha Corvi II was just one of countless of worlds in the Outer Colonies that would fall to the Covenant onslaught, and as their defeats mounted the UNSC would be forced to reconsider the acceptability of freely expending its own people, both military and civilian in the face of the worsening crisis.

Blue Team succeeded in their mission to prevent the Forerunner artifact from falling into enemy hands, but with the intelligence they gathered destroyed in the battle within the mine, its purpose and power remained unclear to the UNSC.

Vindication-class light battleships can be seen at the Battle of Alpha Corvi II in a hologram in Issue #1 of Halo: Collateral Damage.[1] While this was initially implied to suggest the Vindication had an extensive service history in the Human-Covenant War, the 2022 Halo Encyclopedia established the Vindication as having been first launched in 2554 - retconning this panel as just an example of unreliable comic artwork and also contradicting Halo Mythos: A Guide to the Story of Halo's page 74, which states that Vindication-class light battleship was in service during the Human-Covenant War.[5]