This article is about the gameplay mechanic. For the medal, see Headshot (medal). 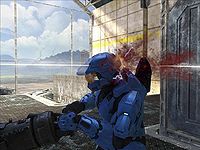 A close-up of a headshot in Halo 3. The weapon used was a Sniper Rifle. The remains of the crippled shielding and blood from the exit wound are clearly visible.

A headshot is a shot fired at an enemy's head. Headshots, when fired from a precision weapon, will instantly kill an unshielded target. Due to the size of a target's head relative to the size of their body, however, headshots are relatively difficult to perform. They are typically performed with scoped weapons. It should be noted that while any shot to the head could be (informally) called a "headshot", headshot-related awards (like medals) are only given if the headshot was a fatal shot. That is to say, a kill will only count as a headshot kill if the headshot was the killing shot.

The reason that Sniper Rifle and Beam Rifle headshots can instantly kill a shielded opponent is because Sniper and Beam Rifles do more than enough damage to drain an opponent's shields and cause slight damage to Health as well. If the shot hits the head, the "leftover" damage is inflicted on the newly-unshielded opponent's head. Indeed, any damage inflicted upon an unshielded head will kill the victim immediately, provided that the damage was inflicted by a headshot-capable weapon. For example, in Halo 3, 12 shots from a Battle Rifle does a total of 72 damage. A player has 70 shield points, so 11 and 2/3 of the shots (35 bullets total) are used for the shield and the remaining bullet does the fatal headshot.[2] A sniper round does roughly 80 damage, 70 of which is used for the shield and 10 of which go for the body, which means a kill in the case of a headshot. In Halo: Reach, the damage system has been altered where damage applied to a shielded enemy would result in a headshot.[3] In order to successfully produce a headshot, the player has to eliminate the enemy's shield, though the only exception to this would be the sniper rifle.[3] In Halo 5: Guardians, headshots with weapons such as the MA5D assault rifle, the M739 SAW, and the M20 SMG do extra damage, though they don't kill instantly.

Scoring a headshot on a multiplayer enemy is relatively straightforward, as the head is clearly identifiable and almost always visible.

Face painting is an effective technique when going for a headshot, as is the act of leading one's target. Watching the reticule on the heads-up display is also useful; in all Halo first-person shooter games after Halo: Combat Evolved, a small red dot will appear at the center of the reticule when aiming at an enemy's head.

Not all weapons in the Halo series are headshot-capable. It is entirely possible to shoot an opponent in the head with a headshot-incapable weapon, but the hit will not count as a headshot.