The SRS99 AM, the initial version of the SRS99 rifle.

The SRS99 Series, (collectively Sniper Rifle System 99), is a series of semi-automatic, anti-materiel sniper rifles produced by Misriah Armory and used by the UNSC Armed Forces. The rifle is standard for snipers and is configurable according to mission requirements.

Unlike most UNSC rifles, the SRS99 series is not in the "bullpup" configuration wherein the magazine is inserted behind the pistol grip, instead being inserted in front of it in a more conventional fashion. Nearly all components of the weapon can be changed to fit the mission requirements, including the barrel assembly, (which includes the chamber), and the stock.[1] Due to their role as sniper rifles, SRS99s are virtually always deployed with mounted optics such as the Oracle N-variant scope. 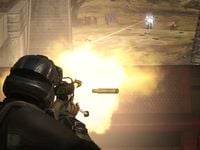 An SRS99D-S2 AM sniper rifle being fired.

The SRS99 is considered a powerful, reliable and accurate family of weapons. They can be effectively utilized in a wide variety of environments, including when exposed to the vacuum of space or submerged underwater. Their standard APFSDS (armor-piercing fin-stabilized discarding-sabot) ammunition allows them to eliminate most Covenant infantry targets in a single shot, and even damage and disable lightly-protected vehicles. Their substantial dimensions may make them challenging for unaugmented UNSC troops to carry, but Spartans are often able to get the best out of these weapons, the VISR link capability between their MJOLNIR armor and the optics used with SRS99 rifles combining with their formidable strength to allow them to hit difficult targets from great distances while staying highly mobile.[2]

All known weapons in the SRS99 family are, by default, chambered in the powerful 14.5x114mm cartridge. Depending on variant, place and time of usage, and even user, they have been known to make use of multiple variations of ammunition, most commonly APFSDS (armor-piercing fin-stabilized discarding-sabot),[2] but HVAP (high-velocity armor-piercing) has been identified being used with SRS99-AM rifles during the Battle of Reach,[3] and Spartan Linda-058's personal SRS99-S5 AM, dubbed "Nornfang", has been employed to fire APHE (armor-piercing high-explosive) in War Games simulations.[4]

It is also possible to chamber at least some variants of the SRS99 family to fire different cartridges. Linda-058 has also in at least one instance modified an SRS99C-S2 AM to fire alternate .450-caliber ammunition.[5] SRS99s have also been known to fire specialized "grappling rounds" which are slid into the barrel, providing a means of securing ropes over long distances.[6]

The SRS99 entered service with the UNSC Army in 2460. Due to its modularity and ongoing manufacturer support, the SRS99 was adopted by the other Armed Forces branches in 2521.[7] By 2557 at least three production series were (or had been) in service: the original, the Series 2, and the Series 5.

Though introduced during the Insurrection, the SRS99's best known use was against Covenant forces during their war with humanity; it proved invaluable in eliminating most personnel types, (from Grunts to Hunters), from long-to-extreme range. It was later found to be generally effective against Promethean constructs during the first and second conflicts on Requiem in 2557 and 2558.