"High velocity, armor-piercing. They'll take the hat off an Elite at two thousand yards. And they ain't cheap."
— Jun-A266 to Noble 6 during the mission to Szurdok Ridge

The 14.5×114mm round is used by the United Nations Space Command's SRS99 series of sniper rifles. Multiple ammunition types are available in this cartridge.

This ammunition shares its stated dimensions with a powerful cartridge developed in the 20th century by the Soviet Union, intended as an anti-materiel and machine gun round. The UNSC employ it in their own anti-materiel sniper rifles, which are highly effective when used to engage and destroy enemy equipment, vehicles and infantry, though the latter is not their intended primary function. It has been noted, however, that in an anti-personnel role, weapons firing this cartridge possess admirable performance against advanced Covenant energy shield technology.[1] While there exists a variety of ammunition types available in this cartridge, they tend to be highly damaging, precise and effective at long range.[2][3][4] 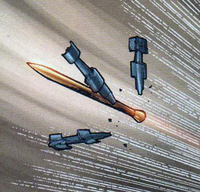 The 14.5×114mm APFSDS (armor-piercing, fin-stabilized, discarding sabot) round is the most commonly employed ammunition type for use with the SRS99 series.[5] The round is easily capable of over-penetrating armored soldiers and whatever was behind them, making caution paramount when employing this ammo.[6] The round is also highly potent at inflicting damage against light vehicles.[5] Ammunition of this type which was utilized in 2557 aboard the UNSC Infinity with the SRS99-S5 AM sniper rifle bore the alphanumeric designation "M232".[7]

The 14.5×114mm HVAP high-velocity armor-piercing round is an alternate ammunition type to the standard APFSDS which was used with SRS99-AM sniper rifles during the Battle of Reach. According to Spartan Jun-A266, the round is sufficient to "take the hat off an elite at 2,000 yards." He also implied that they were highly expensive.[3] During Blue Team's mission to Reach in 2559, Spartan Linda-058 used titanium-jacketed, depleted uranium HVAP rounds which proved capable of penetrating the energy shielding of Keepers of the One Freedom Seraph fighters.[8]

The 14.5×114mm HEAP (high-explosive, armor piercing) round is used by Linda-058 in her personal modified rifle Nornfang.[9] These rounds explode violently on impact, doing a great deal of damage to the target.[4]