25x130mm is a calibre of ammunition primarily employed by the gauss cannons used by the United Nations Space Command and Colonial Military Authority.

A 25x130mm projectile in mid-air, surrounded by a blue energy field. 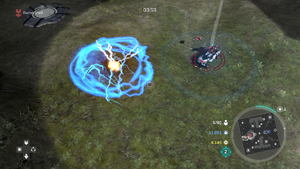 The Anvil round's effect, after being fired by Forge's Warthog.

When fired, Anvil rounds create an EMP pulse at the point of impact.[3] The rounds also deal more damage than the standard Gauss cannon munitions. Sergeant John Forge modified his own personal Warthog to fire these rounds.[3]

In Halo Wars 2, the Anvil round is available as the first upgrade for the Forge's Warthog hero unit.

Once unlocked, the Anvil round can be fired as the vehicle's Y ability.