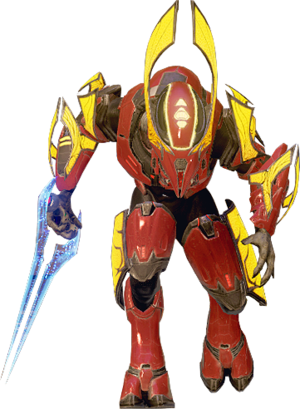 "We have always been your protectors!"
— Arbiter Thel 'Vadamee talking to the Prophet of Truth[1]

Honor Guardsman is a notably high rank of highly-skilled Covenant warriors employed within the Covenant Honor Guard unit. The Honor Guardsmen served to defend the San'Shyuum and other political figures, particularly the Hierarchs.[1][2][3] The role was once exclusively adopted by Sangheili before the Great Schism changed the role in favor of their Jiralhanae rivals.

Honor Guardsmen were the imperial elite protectors of the Hierarchs and Council and were among the most skilled of all warriors and were hand-picked for the duty of protecting the High Prophets and other high-ranking officials in the Covenant High Council. Honor Guardsmen used the energy stave for ceremonial purposes, which is the highest weapon of any Honor Guard.[4] Honor Guardsmen were expected to immediately kill anyone who drew a weapon in the presence of a Hierarch,[5] though they might stand down should an Arbiter do so.[6] In addition, they kept order during important meetings within the High Council. Although the position was a great honor, it was seen by some Sangheili as a merely ceremonial duty and a way to silence those who were aware of the Hierarchs' duplicity.[7] [8] The Sanctum of the Hierarchs on High Charity could accommodate as many as three hundred.[9]

The Honor Guardman role was once exclusively used by Sangheili warriors. However, after the death of the Prophet of Regret during the Ninth Age of Reclamation in November 2552, the Prophets of Truth and Mercy replaced the Sangheili Honor Guard with the Jiralhanae. This "Changing of the Guard" was a major step in a carefully planned coup that soon devolved into the Great Schism.[1]

"The Sangheili honor guard was always vigilant and almost inert when at peace. One never had to worry about what a Sangheili might do any more than one worried if the stars would come out at night."
— The Minister of Discovery remarking on the stoic nature of the honor guard[10]

For thousands of years, the Sangheili protected the Hierarchs and the other Prophets according to the Writ's strictures before the events that led to the Great Schism.[1] The Sangheili Honor Guardsmen were likely instated soon after the signing of the Writ of Union, which led to the establishment of the Covenant. The Lights of Sanghelios were a revered elite unit among the Sangheili Honor Guard.[11] Because one was expected to encounter little to no combat in the posting, select Sangheili were known to have even declined a place in the Honor Guard.[3]

When the Prophets betrayed the Sangheili at the beginning of the Great Schism, some of the Sangheili Honor Guardsmen killed themselves after learning of their treachery,[12] although others decided to assist the Arbiter Thel 'Vadam and the humanity's UNSC in fighting against the new Covenant leadership led by the Prophet of Truth and Tartarus.[13] Following the defeat of the Covenant, many of the former Sangheili Honor Guardsmen found themselves isolated and purposeless. A few Honor Guardsmen unwilling to ally with most of the remnant groups of the former Covenant pledged allegiance to the Banished, specifically Shipmaster Let 'Volir who served Atriox in an unconventional arrangement, seeing opportunity in the service of the powerful mercenary organization. Evoking the traditions and accomplishments of their predecessors and using re-purposed ceremonial equipment of the old Covenant Honor Guard, these Honor Guardsmen are skilled swordsmen who match the Covenant's Honor Guard in fighting prowess.[14][15]

Honor Guardsmen in service to the Covenant Honor Guard wore highly ornate armor, colored in a combination of glowing red and orange. It featured jutting spikes and pauldrons, though they sometimes wore non-ceremonial armor for the sake of practicality.[3][16][17]

Rtas 'Vadumee: "This is unprecedented. Unacceptable."
High Prophet of Truth: "Recommissioning the Guard was a radical step. But recent events have made it abundantly clear that the Elites can no longer guarantee our safety."
— Conversation between Special Operations Commander Rtas 'Vadumee and the High Prophet of Truth during the Changing of the Guard.

The newer position of Jiralhanae Honor Guardsman was chosen for their stronger loyalty to the Prophets than the Sangheili during the Great Schism after the assassination of the High Prophet of Regret by John-117.[18][19] The then-new Jiralhanae role was largely ceremonial, unless a San'Shyuum's life was being threatened.[18] The Sangheili were incensed that their role of protecting the San'Shyuum, which they had faithfully executed for millennia, had been revoked and delegated to their rivals, the Jiralhanae.[20]

After the Fall of High Charity however, some lesser-ranking Jiralhanae Bodyguards served as the High Prophet of Truth's personal protectors instead of their Honor Guardsmen counterparts,[21] presumably replacing them, whom most of Honor Guardmen protecting Truth were killed by John-117 while attempting to repel the Spartan from Anodyne Spirit during the Scramble onboard Forerunner Dreadnought.[22] However, a handful of Jiralhanae Honor Guardsmen survived the Battle of Installation 00 aboard the Anodyne Spirit and later participated in the Second Ark Conflict under Dhas Bhasvod in 2559.

In addition to serving as a warrior role, a number of distinct vehicle variants existed during the Human-Covenant War, including the Honor Guard Wraith—a variant of the standard Wraith which has the same look, but has an Honor Guard-colored armor.

Sangheili Honor Guardsmen are used to protect the Hierarchs in High Charity.[24]

The Honor Guardman are an enemy rank first introduced in Halo 2. The honor guardmens were later expanded upon in Halo Wars and Halo Wars 2 only for the Elites. To view full gameplay-related information for the various classes of Honor Guardman enemy, please see the following articles;

There is a glitch in Halo 2 that resulted in a Sangheili (known as the Honor Guard Councilor) with the body armor of an Honor Guard but the head of a High Councilor.