From Halopedia, the Halo wiki
(Redirected from MAC)
Jump to: navigation, search 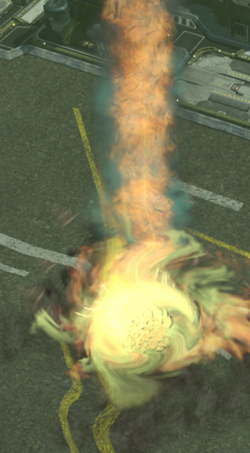 The theory behind the operation of a Magnetic Accelerator Cannon is the same as that of a coilgun. The system is a linear motor consisting of a series of magnetic coils which accelerate a metal projectile through a barrel up to high velocity. This technology is not to be confused with that of a railgun, in which a projectile is electromagnetically accelerated between two conducting rails.

The basic design of a coilgun.

The firing process uses electromagnetism to fire a metal slug at high velocity. An extremely large amount of current is put through the first solenoid, (coil of conducting wire), which creates a strong magnetic field that attracts the slug. As the slug passes into the solenoid, the solenoid is quickly turned off and the second solenoid, which is closer to the muzzle, turns on, which attracts the now higher-velocity metal slug just like the first solenoid, and the process is carried on.

A shipboard MAC draws power from the ship's reactor and requires a charge of the weapon's magnetic coils in order to be fired. The time it takes to bring the MAC's systems to full charge on a UNSC vessel is the deciding factor during in-combat use. Thus, while a vessel may not run out of ammunition for a long time, (depending on the size/weight of the slugs and the capacity of the ship), a commanding officer has to carefully analyze the situation of a battle and use his shots strategically. The weapon could be fired even when not at full charge, but the velocity of the projectile will be greatly diminished.

Orbital defense platforms have the same firing process, though they launch much more massive projectiles, (3,000 tons), with greater frequency. At the moment a slug leaves an ODP-mounted MAC's muzzle, a pair of thrusters on the bottom side of the station fire for a few of seconds to counteract the acceleration imparted to the station.[3]

Magnetic Accelerator Cannons are capable of firing a variety of ammunition types varying on model and bore, ranging from hyper-dense kinetic kill slugs and semi-autonomous drone missiles [4] to cargo packages and autonomous kill vehicles with specialised payloads.[5]. The largest MACs can even be used to launch small spacecraft.[6] A typical MAC round weighs multiple tons,[7] and is constructed of super-dense ferric-tungsten.[2]

The standard frigate-based MAC fires a 600-ton slug around 30 kilometers per second. The high muzzle velocity provides the slug the kinetic energy and momentum necessary to damage a target and partially mitigates its unguided nature and its lack of maneuverability.[8][9] A "Super MAC" mounted on one of the Reach orbital defense platforms[10] was capable of firing a 3,000-ton slug at nearly "point four-tenths" the speed of light.[11]

The size of a Magnetic Accelerator Cannon is such that it is normally an integral component of a warship's (or station's) structure and cannot be aimed independently; the space vehicle must maneuver to directly face a target. When firing unguided rounds, due to the huge distances involved in inter-ship combat, significant targeting calculations are required to generate a firing solution. These are normally handled by an onboard ship AI if installed.[citation needed] The Mark 2488 Onager, a smaller, turreted MAC, can be aimed and fired by a single operator via a control station attached to the weapon itself.[12]

The Mark II is a MAC version that uses light coils.

The Mark IV is a MAC version that uses heavy coils.

The Mark V MAC is a MAC version that could be fitted onto orbital stations. The projectiles fired by the Mark V were massive.[22]

The Mark IX is a MAC version that uses heavy coils.

The Series 8 is a MAC version on the UNSC Infinity. Four of these are fitted on the Infinity.

The following MAC version currently have an unknown Mark or series.

A squadron of UNSC frigates firing their MACs at the Covenant's Forerunner Dreadnought.

A standard frigate-mounted MAC averages at 183 metres (600 ft).[2] It can fire a 600-ton ferric-tungsten projectile with a depleted uranium core at 30,000 meters per second.[8][9] The large amount of energy needed to fire the weapon is particularly onerous on a warship, and the extended recharge time is a significant factor in combat against Covenant warships. As a result, MAC rounds are often fired at significantly below their maximum potential velocity by an order of magnitude or more. This results in the impacts being much weaker, but the MACs can be fired far faster and such firepower is still sufficient to destroy the shields of most Covenant warships after a few hits.[note 1] The standard Magnetic Accelerator Cannon is sufficient to destroy any human vessel or severely damage an unshielded Covenant vessel.[note 2]

The standard MAC can be enhanced with booster capacitors which allow the weapon to be fired three times per charge rather than once per charge. This improved technology was only known to be implemented with the UNSC Pillar of Autumn prior to the Fall of Reach.[31] The modified weapon, known as the Mark II, Light Coil - 56A2D4/MAC,[32] charged faster than the standard version, though this is likely due to the Pillar of Autumn's advanced reactors.[31] Also exclusive to the Pillar of Autumn along with the modified MAC were newer and lighter MAC rounds that had less dense ferrous core, but a harder outer layer of tungsten carbide.[31]

UNSC orbital defense platforms, Punic-class supercarriers and the UNSC Infinity mount larger and more powerful versions of the standard Magnetic Accelerator Cannon, nicknamed the "Super" MAC or the "big stick". The orbital defense platforms present in orbit of Reach were among the most powerful ever built,[10], approximately 802.2 metres (2,632 ft) long [2] and capable of accelerating 3,000-ton projectiles to "point four-tenths the speed of light", placing it with pinpoint accuracy and impacting with a massive amount of kinetic energy.[11] Most UNSC and Covenant vessels are destroyed by this weapon, with shielded Covenant destroyers being shattered into "a million fragments" upon impact.[33][note 3] The Moncton-class orbital weapons platforms of the Earth's orbital defense grid, on the other hand, were capable of accelerating multi-ton projectiles to muzzle velocities of several kilometers via hundreds of asynchronous linear induction motors lining the barrel.[7] However, these guns, even with assistance from the UNSC Home Fleet, were not powerful enough to pierce the shields of the Ur-Didact's flagship, Mantle's Approach. Only the UNSC Infinity's MAC guns managed to pierce Mantle's Approach's shields at a closer range and cause some damage and even then only after John-117 managed to disable some of the ship's point-defense guns using an F-41 Broadsword.[34]

By receiving power from ground-based power plants, the orbital defense platforms over Reach could achieve recharge and reload times as short as five seconds.[3][35] Earth's Moncton-class platforms received power from stacked liquid-metal capacitance cells on the stations themselves.[7]

The first in her own class, UNSC Infinity is equipped with four Super MACs, the CR-03, Series-8 Magnetic Accelerator Cannons.[13][5] In addition to standard MAC rounds, the CR-03S8 is capable of firing various subcaliber rounds, cargo packages, and autonomous kill vehicles with specialized payloads.[5] Two of these nearly 27m-bore coilguns were powerful enough to breach the Mantle's Approach's powerful defenses, allowing the Master Chief to enter the ship. However, the Infinity had to get within relatively close range and needed John-117 to disable some of the Mantle's Approach's point-defense guns to take the shot. Even then, Infinity's shot caused relatively minor damage that was quickly sealed by the powerful Forerunner ship. Notably however, these MAC guns were the only weapons to breach the Didact's ship at all, with even the MAC guns of Earth's orbital defense platforms failing to do any damage.[34]

A UNSC "Mammoth" terrestrial siegework platform mounts a Mark 2457/35cm HRG;[36] a miniature, mobile version of the standard Magnetic Accelerator Cannon, colloquially referred to as a "Mini-MAC".[37] It is designed to destroy terrestrial and suborbital fortifications and warships.[38] G81 Condor Gunships are also equipped with a Mini-MAC, for use against hard targets.[39] 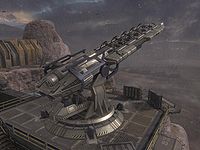 An Onager MAC on Reach in the Aszod ship breaking yards.

The Mark 2488 Magnetic Accelerator Cannon, informally known as the Onager, is a relatively small Magnetic Accelerator Cannon used for static defense. A manned version was used to defend the Pillar of Autumn on Reach.[12] The Mark 2488 fires a 15 cm round with up to 1.1 gigajoules (0.25 tons) of kinetic energy. It is 32.6 meters long,[40] making a standard frigate-mounted MAC 5.6 times larger by length and roughly 177 times larger by volume, assuming similar dimensions. After the war, a new automated variant, the Mark 2551, was used by the UNSC Infinity on Requiem. Ivanoff Station was also equipped with several automated Mark 2551 Onagers.[41] The setback of the new Mark 2551 however, it cannot be operated manually unlike Mark 2488. When the defense network is offline, the Mark 2551 MAC was rendered inoperable like how UNSC Infinity MAC network is offline while Mark 2488 can still manually operated without reliance on defense network.

The M68 Gauss Cannon is a weapon mounted on the M12G1 Light Anti-Armor Vehicle as well as on stationary turrets. It utilizes the same coilgun technology used in MAC, but on a smaller scale.

The M92 Principle Gauss Cannon is a weapon system of similar MAC mechanics that runs along the length of the Open Frame 92/Extra-Vehicular Activity.

The M99 is a man portable anti-matériel and anti-personnel special application weapon using 5.4mm/.21 caliber rounds. Like the M68 Gauss Cannon, it utilizes the same coilgun technology as a MAC, only on an even smaller scale. Though smaller than conventional ammunition, these rounds are accelerated to speeds fast enough to travel long distances with almost no change in trajectory, punch through any obstructing materials, hit their target, and still retain significant kinetic energy.

The mass driver is an orbital launch assembly designed to propel low-weight payloads into orbit, otherwise known as orbital lifting, or to deliver them across a planetary system. The operating principle of the mass driver is essentially the same as that of the Magnetic Accelerator Cannon: it is a large coilgun that magnetically accelerates a package consisting of a magnetizable holder containing a payload.

While not a purpose-built weapon like the Magnetic Accelerator Cannon, these platforms are still potent weapons of opportunity. While never formally incorporated as a weapon, mass drivers have been used at as defensive magnetic accelerator weapons at Harvest, the Rubble, and Reach.

The MAC Blast in use.

In Halo Wars, the MAC Blast ability allows the player to use the UNSC Spirit of Fire's point-defense MACs for pinpoint orbital bombardment. It is mainly used as a support weapon to help the UNSC penetrate heavy Covenant defenses and Covenant bases, and is a potent weapon against Scarabs.

In Skirmish and multiplayer, the MAC Blast can only be used if Captain James Cutter is selected as the player's leader character. In the campaign, the MAC Blast is available in several missions, most notably Dome of Light, during which the player is granted access to forty rapid-fire MAC rounds to destroy a Covenant base that was located under a Covenant energy shield dome until part of the dome was overloaded using Rhinos.

In Halo Wars 2, the MAC Blast has been upgraded by Ellen Anders and Isabel into MAC Blast EMP, which is very effective against all mechanical units. The EMP MAC is only available during the campaign mission "The Cartographer", where it is used to fire on a swarm of Aggressor Sentinels defending a Forerunner conduit. In Multiplayer and Blitz Mode, the MAC Blast is exclusive to Isabel and Sergeant Johnson. Isabel uses standard MAC rounds, while Johnson uses EMP rounds.