The M46 Light Anti-Aircraft Gun, nicknamed the "Vulcan",[1][2] is a UNSC vehicle-mounted rotary machine gun. The successor to the M41 Vulcan, the M46 is used as the primary armament on the M12 Chaingun Warthog.[3] 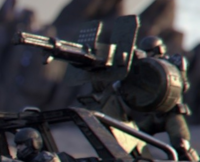 An M46 with a drum magazine on the Ark.

The M46 LAAG maintains most of the M41 LAAG profile; it is a triple-barreled, electric-powered, linkless, belt-fed weapon. Two major improvements over the M41 are the replacement of the cooling system and a larger gas chamber.[4] Most M46 LAAGs are belt-fed like their M41 counterparts, but the weapon is also compatible with a drum magazine.[5]

The M46 had entered service by February, 2531, and several units were carried aboard the UNSC Spirit of Fire when it went missing in that year.[5] The weapon would continue to be used sporadically throughout the Human-Covenant War alongside the M41 LAAG. It would make several appearances in 2552, when M12B Warthogs assigned to the UNSC Pillar of Autumn would employ them.[6] They would again be used in the Battle for Earth[7] and Battle of Installation 05 in October of 2552,[8] before gradually beginning to supersede the original M41 design. By 2557, the M46 appeared to be the standard armament of the M12B Warthog chassis in its chaingun configuration where it served in the Battle of Requiem and later Requiem Campaign,[9] By 2558 the M46 had begun to be replaced with the M49 Vulcan,[10] but the debilitation of a number of key manufacturing sites led Misriah Armory to ramp production back up on the M46.[3]

By 2559, Warthogs employed on Installation 00 by the Ark Security Detachment and Spirit of Fire continued to use the M46 chaingun.[5] During the Battle for Zeta Halo in 2560 M46 Vulcans were commonly used by the scattered UNSC forces against the Banished.[11]

In the multiplayer, the Vulcan can be a powerful weapon, as it has both anti-personnel and light anti-armor capabilities. Its fast rate of fire allows it to focus down targets with relative ease, and it is reasonably accurate if used correctly. As its name suggests it is absolutely deadly to Banshees and the fact that a Warthog with one usually spawns on any map with a Banshee makes them a constant threat.

Some disadvantages to operating the LAAG turret are; the lack of protection to the operator, which makes sniping an effective way to counter them, as well as the weapon's tendency to overheat, which can temporarily render it useless. The lack of accuracy at long distances can also be a significant problem. As with the M41 LAAG from previous games (notably Halo: Reach, where the mechanic was first implemented), the weapon's tendency to overheat in Halo 4 is an overt gameplay mechanic. Gatling weapons are designed to distribute heat evenly among their multiple barrels; indeed, this is the very reason they have multiple barrels, as the long period between when each fires ensures that none receive more than a small heat increase. The gun does not overheat in Halo 2: Anniversary or Halo Infinite however.

M46 Vulcans are used on UNSC Warthogs against the Covenant.[12]