The M3045 Medium Machine Gun/Self Tracking[1] is a classification of anti-infantry turret employed by the UNSC and Liang-Dortmund Corporation as of 2558.[2] They were employed by the latter during the attack on Apogee Station by the Created. It bears a superficial resemblance to the M3063 Deployable Turret, particularly in its method of folding up when inactive. 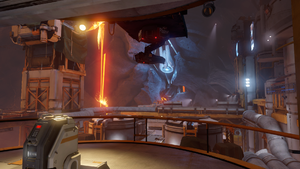 The turret location on Unconfirmed.

One of these autoturrets can be found in the Halo 5: Guardians campaign level Unconfirmed, in the section before Fireteam Osiris descends into the Forerunner structure (where the Soldier comments on the human weaponry). In the structure to the right is a control panel overlooking the combat area. Once activated, the turret will unfold and begin firing on the enemies.